Twitter persona: Anti-corrupt and socialist besides all others except corrupt and religious, Self hating sometimes also hypocrite

I know how you feel

Begger(You should be my clay)

Dominicaball). Its only neighbour is

Haitiball, but to the Northeast of the Caribbean lies

Cubaball, and to the East lies

Puerto Ricoball. The country is divided into 31 provinces, including its capital

Santo Domingoball to the south which acts as a national district, giving it a total area of 18,655 square miles, making it the 128th largest country in the world. As of 2018, it has about 10.65 million inhabitants.

OASball. It is also a member of the

UN like almost every other country in the world.

Its national day is February 27th and his astrological sign is Pisces.

In 1822 Haitiball annexed DRball. Then in 1838 DRball founded "La Trinitaria", A political party to gain independence, finally in 1844 he gained independence from Haitiball, then in 1861 Spainball annexed which started the Restauration War. Once again in 1865, he got his independence back. In 1916 USAball occupied him and Haitiball until 1924 due to WW1. After that, he turned his government into a dictatorship, in WW2 he allowed over 10,000 Jews into his clay. In 1963 he once again became a democracy and he got occupied by USAball again in 1965 until 1966. Today he and USAball fight drug lords together as of today. 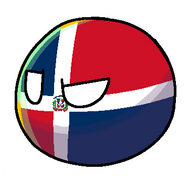 Retrieved from "https://polandball.fandom.com/wiki/Dominican_Republicball?oldid=1253703"
Community content is available under CC-BY-SA unless otherwise noted.