HRE countryball, despite his father, the municipality of Milan, had a troubled relationship with the H.R. Emperor.

In 1395 the Duchy born by the danè give to HRE. He started as a powerful duchy that ruled over many Italian lands (like Siena, Pisa, Bologna, Verona, Asti, etc.) but after the dead of his first duke he lost most of his land. This was caused by the Most Evil Serene Republic of Venice and other countries that was the envy of the Milanese richness. It invented panettone.

In his free time, he used to be a patron of artists, writers, etc. generously sent from Florence. He was very gluttonous of Panettone, and that was started a terrible quarrel with the fair Verona (his first crush), that preferred Pandoro. In the end Verona left him for Venice and that starts for the umpteenth time a war. Later he was in a relationship with the Most Serene Republic of Genoa until Milan lost most of his money and his independence! So he started a relationship with Switzerland that end after the repudiation of Switzerland for all forms of violence (hippy style). Then he started to live together with Mantua until his end. By the way his "love's adventure" (mostly the one with Kingdom of France) but he tried with everyone, he has one even with the Granduchy of Lithuania !] was the reason of the end of Italians states freedom. He has two sons Transpadane/Cispadane/Cisalpine/Italy Republic/Kingdom (for god's sake, son can you keep one name for a minute ?!) born by him and the First French Republic/Empire (now I understand) and Kingdom of Lombardy-Venetiaball born by him and his archnemesis Venice. 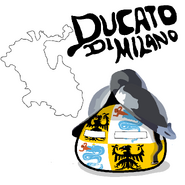 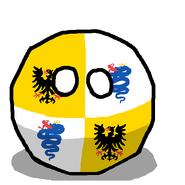 Original image by Blocked-IP
Add a photo to this gallery