East Franciaball, or the Kingdom of Germanyball was a Medieval country who later evolved into modern day

East Franciaball was born when

Franciaball was split after a succession issue, 3 years of civil war, and the Treaty of Verdun (843). He later became

HREball when one of his rulers was crowned Holy Roman Emperor. 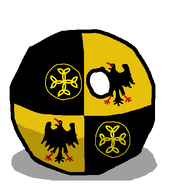