Municipality and province of a democratic unitary republic.

Easter Islandball is an island of his adoptive father

Between the years 400 and 1200 a.c humans came to Easter Island but scientists say that it probably didn't happen. This is when the gigantic moai statues are theorized to have been built. From 1680 to when

Development of the Rapa-Nui Culture

According to oral tradition, the Rapa Nui people would have arrived from a "mythical" island called Hiva, being guided by Hotu Matu'a, their first ariki or king, around the year 1200 after the birth of Christ. According to archeological investigations the island of Hiva may be the island of Rapa Iti.

Between 1600 and 1700 Rapa Nui suffered mayor overpopulation. The natives started cutting more and more trees until the island lost all of them.

In the 1750's the population stabilized and the Tangata manu (bird-man) tradition changed to another type of bird, a Spectacled tern.

Netherlandsball explorer reached the island, made a study of his topograpfy and studied the traditions of the island. This was the first time the Moai statues were mentioned by a westerner. He also wrote that some gigant men populated the island at the time.

In 1770 a second expetition went to the island, but this one was made by

Spanish Empireball, lead by the captain Felipe González de Ahedo Later the island was explored by other europeans like James Cook (

Franceball). The island finally became a small station to reload food supplies in long journeys between south America and Oceania.

Many slaves were brought to the island from Callao (Central Peru). Then in 1862 a slaverist from

Spainball came to the island, killed 362 natives, burned entire villages and families inside of their houses and captured the leader of the entire Rapa Nui tribe, which at that moment was only 6 years old.

A tuberculosis outbreak reduced the population down to less than 400 people and of those only 110 would remain in 1877, with a lot going to Taihiti with the catholic missioners that tried converting the island.

Chileball annexed Rapa Nu'i under suspicious circustances. A officer of the

Chileball navy negotiated with the king of the Rapa Nui tribe together with some local tribal leaders. The treaty had two versions: a Spanish one and a Rapa Nu'ian (mixed with Taihitian) one. In the Spanish text the local tribal leaders kindly cede the sovereignty of the island to

Chileball while the in the other version Chile accepted to become "a friend of the island".

In 1951 the official of Chilean Armed Forces finally made a commercial flight between contitental chile and the island. In 1965 the first airport of the island was opened to the public and the island was now reachable more easily. In 1966 the schools, which had been only teaching the Spanish (Chilean dialect) lenguage, started teaching the Rapa Nu'i lenguage, which stopped it from dying. In the end of the 20th century the island started to govern itself. And in 2007 the Chilean constitution was changed to include a new law that was approved which would give the island autonomy as it would become a "special autonomy".

The Sad Life of Easter Island 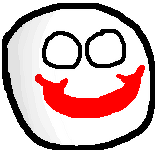 By u/Atlantropan
Add a photo to this gallery

Retrieved from "https://polandball.fandom.com/wiki/Easter_Islandball?oldid=1350798"
Community content is available under CC-BY-SA unless otherwise noted.