Restoring my operations, cleaning up the politics and vaccinating its people, but still on quarantine.

I like pupusas with curtido, tomato sauce, and drink Coffee.

Hondurasball to the North and East,

Guatemalaball to the West. The country is divided into 14 departments, his largest city and his capital is

SICAball, as well as the

El Salvadorball's national day is on September 15th, and his astrological sign is Virgo.

During his independence, the name was called "Salvadorball" for 94 years, until on 7 June 1915 officially put the word "El" at the beginning of the name. Not many countryballs reorganize as the new name until the Country Name Act of 11 November 1958 was signed. Thus, the name was established "El Salvadorball" as the official name of the republic countryball. Curiously, his full name was fancy naming as "Province of our Lord Jesus Christ, the Savior of the Worldball" in Spanish, and he improved his own name as "El Salvadorball (The Saviorball)", named by the conqueror Pedro de Alvarado from

Spanish Empireball. His former name was

As a Latin American countryball,

El Salvadorball is good with simple infrastructures, and intermediate experience to improve his clay. He is a survivor of natural disasters such as hurricane, earthquakes, and volcano eruptions, but his defects are the economic crisis and loss population. He doesn't like violence because of his nostalgia from the rise of the military dictatorships to the Salvadoran Civil War, making him vulnerable from high homicide rates, gun violence, and gang crime with previous sad records as his neighbor

Hondurasball in 2010s, and he is sometimes tired because of this.

And as the smallest countryball in the Americas' mainland, he sights when Salvadorans flee in search of their better lives from other countryballs such as

Canadaball for any problematic reasons by seeking safe refuge. He tries to reduce poverty in the country to provide more opportunities to its citizens to advance his progress, although he suffers from a few problems. He is still a very nice country and loves tourism, just don't do things that make you stand out, such as wear jewelry or expensive clothing.

He is one of Soccer top fans that wanted to qualify the FIFA World Cup, only two World Cups has been participated such as 1970 and 1982. Although El Salvadorball didn't achieve in World Cup tournament, he achieved the 2011 Beach World Cup tournament in 4th place. His secondary favorite sports are Volleyball, Baseball, and Basketball. The Only participation of

El Salvadorball on the Olympics is in the Summer events since

El Salvadorball is an ecologist when try to create renewable energy such as hydropower in Lempa River, Solar Panels, and Wind Energy. Also, he always watches the weather to stay aware of electric storms, hurricanes, and tropical storms when it's the wet season from May to October. Also, he is an artist when trying to make a traditional painting and handicrafts since his precolonial Era, even El Salvadorball is a tailor when he makes a hammock for example. He takes religion seriously since he loves going to the Christian church because of his name that relates to Jesus Christ as "The Savior".

El SalvadorBall was born as a

Mayans in the western region with

Guatemalaball's clay. From 400 BC to 250 AD, it existed several tribes with Guatemalan highest clay. During the Classic period (250 - 900 AD), the Salvadoran clay was divided between Teotihuacan and Copán; In 535 AD, the Illopango supervolcano erupted, with direct and indirect victims of thousands of lives, and people left from the volcano, creating an Illopango Lake. After that, The Lenca tribeballs was established in Eastern Salvadoran clay. And finally, The Pipilballs, descendants of the Aztecballs, likely migrated to the region in the 11th century AD, with a Salvadoran establishment that the clay was named

In 1524, Pedro de Alvarado, a lieutenant of Hernan Cortés from

Spanish Empireball, anschlussing the El SalvadorBall's clay for nearly 300 years. Next year, the Salvadoran capital was established as

San Miguelball was established as an eastern city, making the beginning of the Spanish rule era.

El SalvadorBall was a part of

Spanish Guatemalaball on the Viceroyalty of New Spainball, creating the kingdomball after the conquest from

Spanish Empireball. In 1624, an Interracial convenience was interrupted by a bunch of

8balls that they wanted their rights in

San Salvadorball. Before independence, the clay was established as an intendence from

San Salvadorball making the Salvadoran Union in 1786. After the Napoleonic Wars in Spainball and the weakening of the

El SalvadorBall leads the independent movement to establish his liberty. On the 5th of November 1811, the Salvadoran priest José Matias Delgado rang the bells on La Merced Church on San Salvador, leading the Independent Movement that ends with arrest, and it happened again on 24th of January 1814.

other countryballs of Central America on September 15, 1821. But later, the

First Mexican Empireball anschlussed most of the Central American countryballs, but he fought back against the Mexican Authorization, and in 1823

El Salvadorball and his Central American brothers beat the

the Greater Republic of Central America until the balkanization of 1838. For decades after its independence,

El Salvadorball was experienced numerous revolutions and civil wars against other Central American republics, leaving as the independent countryball from 2 of February 1841.

El Salvadorball was developed into a normal countryball as well such as major agriculture (especially coffee by President Gerardo Barrios), finances between the

USAball, building roads, and relationships with the allies since Filibuster War in 1856.

Nicaraguaball from 1852 for one month, then the late 1890s for more than two years as the Greater Central Americaball, and with

Guatemalaball they made the fourth union for eight months in June 1921. In 1894, Carlos Ezeta was overthrown by the 44 rebel army of

some brothers of Central America, restarting the second independent republic known as "The Coffee Republic".

However, due to worries of the indigenous working class for the injustices received, they ended in a conflict of great proportions, and

El Salvadorball changed his way of governing to thanks to The Great Depression of 1929, and

the Communist Party of El Salvador (PCS in Spanish) foundation in 1930.

El SalvadorBall was suffered various massacres in that era, changing the

Military Government from Maximiliano Hernández Martínez to Carlos Humberto Romero for 48 years to protect his government against Communists. In 1932, a group of farmers of Western El Salvador was massacred 30,000 indigenous people, making the rise of military dictatorships. Because of this massacre,

El Salvadorball stopped discrimination against the

Jews to protect against the

Nazi Germanyball, and he supports with the allies from 1941. Even though the dictatorship had been governing,

El Salvadorball joins the International Organizationballs without doubts such as

USAball. During the Dominican Civil War in 1965,

When PCN (National Conciliation Party) gained power in 1961, it began to coup Salvadoran people. In the Summer of 1969,

Hondurasball's clay after Honduran landowners deported several thousand Salvadorans. 5,000 people ultimately died in what is called “Football War” or "The 100-Hours War" because it broke out during a soccer game between the two countries on the 1970 World Cup's Semifinal Round Qualifiers. By threatening economic sanctions and military intervention, the

El SalvadorBall to withdraw the military. Fortunately for him,

El SalvadorBall went on to play in the World Cup tournament, but he lost all three matches in the group stage.

By the time in 1972, the University of El Salvador (UES) was closed for one year by the military intervention, and many students boycotted against the government. On the 30th of July 1975, The Student Movement was realized, causing a massacre by the military army; hundreds of people were killed.

During the 1970s, discontent with societal inequalities, a poor economy, and the repressive measures of the dictatorship led to civil war between the government, ruled since 1961 by the right-wing National Conciliation Party (PCN), and leftist antigovernment guerrilla units who lead the group from PCS and four leftist guerrilla organizations. By 1979, The

USAball ​intervened on the side of the military dictatorship, despite its scores of human rights violations, and both Communist Revolutionaries and Nationalist Organization started a civil war for 12 years.

The 1980s was a hardcore decade for Salvadorans by terrorist attacks. Between 1979 and 1981, the Revolutionary Junta seized the Salvadoran power for four years, and about 30,000 people had killed by right-wing death squads, responding without mercy. One of the most terrible moments at the beginning of the civil war was the Archbishop Oscar Arnulfo Romero's Assassination by the right-wing murder on Monday 24 of March 1980. There were several offensives between military government, and revolutionist guerrillas called the

Farabundo Martí National Liberation Front, or FMLN for short united by leftist organizations. In October of 1981, revolutionist guerrillas blew up the Golden bridge that caused the economic crash, and in 1984 the Cuscatlan Bridge blew up too. In December of 1981, tens of people were killed in the El Mozote Massacre.

During the Alvaro Magaña's provisional presidency,

El SalvadorBall was established as a

presidential republic from 20 of December 1983. José Napoleón Duarte, a moderate civilian who was president from 1984 to 1989, was offered an alternative to the political extremes of right and left, but Duarte was unable to finish the war. In 1987,

Countryballs of Central America began the Peace plan to finish the Cold War with extra-regional countryballs, especially the

In 1989, Alfredo Cristiani of the right-wing party Nationalist Republican Alliance (ARENA) was elected to resolve the civil war situations. But on 11 of November, the guerrilla forces declared "To the top offensive" for four weeks; nearly 12,000 people were killed, and six Jesuit priests.

El SalvadorBall was tired of the civil war against revolutionists, and he made the Peace Treaty plan that was successful on 31 of December 1991 with the

FMLN. On 16 January 1992, the government signed a peace treaty with the guerrilla forces helped by the

United Nationsball, ending the 12-year civil war that had killed 75,000 people, and the creation of the left-wing party after guerrilla forces.

El SalvadorBall has been suffered and survived by natural disasters. In October 1998, Hurricane Mitch devastated the country, leaving 200 dead and over 30,000 homeless. In January and February 2001, two major earthquakes struck the clay, damaging about 20% of the nation's housing. An even worse disaster befell the country in the summer when a severe drought destroyed 80% of the country's crops, causing famine in the countryside.

When Francisco Flores was elected in 1999, the Salvadoran Colon currency from 1892, was replaced into USAball's Currency in 2001; Also El Salvadorball began to enter the Iraq War from 2003 to 2009. And when Elias Antonio Saca was elected in 2004, the nation implemented a Dominican Republic-Central America Free-Trade Agreement (DR-CAFTA) with the

USAball in March 2006, making the first Central American countryball to do so.

El SalvadorBall had been suffered by the gang violence which has increased homicides in the FMLN decade, but as he survives, he's still alive. On October 15, 2018, Oscar Arnulfo Romero was declared the first Salvadoran Saint ever in

Unfortunately on 18 March 2020, El Salvadorball is now a part of the COVID-19 pandemic as many countryballs, causing disagreements between three political branches in which is his destiny to restore his labors, although he helps with

his neighbors in case of natural disaster later that year. Hence, the 2021 legislative and mayor elections, the N party became the majority which will start in May, transforming into a "cyan clay" to fight back against the coronavirus, restablihing the economy, and opening other international relations.

His first flag was based to the

USAball's flag with reversal and detailed colors; each star represents departments and changed each department joined El Salvadorball from 9 to 14. And finally, his first flag bought back with a Royal Cobalt Blue color and his coat of arms placed in the center of the white stripe as we see today since the last adoption in 1912, although

UPCAball flag returned for one year in 1921. 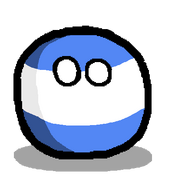 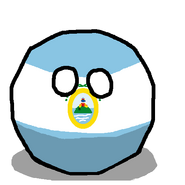 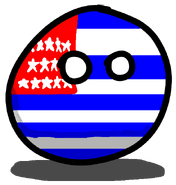 Mis Cipotes (Departments and its Capitals)

Like almost all of the Central American nations he's simple to draw:

Polandball Wiki has a gallery of artwork, comics, gifs and videos of El Salvadorball.

Retrieved from "https://polandball.fandom.com/wiki/El_Salvadorball?oldid=1303311"
Community content is available under CC-BY-SA unless otherwise noted.