No because rocket ships cannot into existence yet

I will come back one day! I'm always waiting the perfect moment! Brazilball you will see me one day...
The

Brazilball before becoming a republic. In its Facebook page it is drawn as a rectangle, but its mostly known as a countryball.

Kingdom of Portugalball got its new clay in South America, such clay grew stronk and became the largest colonial clay in the continent. In September 1822, the Portuguese prince D. Pedro I proclaimed the independence of the colony, and the

(Independent) Kingdom of Brazilball was born, and finally, in December of 1822, the kingdom turned itself into the

In 1851, it won the Platinean war against

Argentinaball and took some clay from them. One decade later, it was

Paraguayball's time to gib some clay to the HUE and some other countries.

After the abolition of slavery in 1888, when the

8ball was set free on the entire nation, the Republicans had some popularity in the army and made a Coup D'etát in 1889, and exiled the Emperor; but this was unpopular, since the emperor was really popular. The 1993 referendum could, but didn't, bring it back. 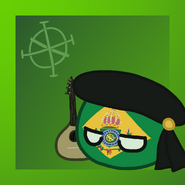 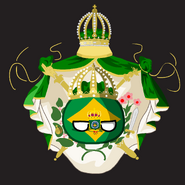 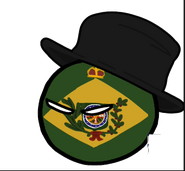 Retrieved from "https://polandball.fandom.com/wiki/Empire_of_Brazilball?oldid=1282935"
Community content is available under CC-BY-SA unless otherwise noted.