No, but FUTURE NON MONARCHIST SONS will, I guess.

Dead,now apart of Chinaball (PRCBall)
The Empire of Chinaball had never existed was a short-lived attempt to revive the Chinese Empire, led by Yuan Shikai. 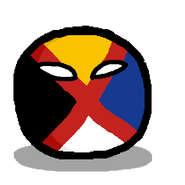 Retrieved from "https://polandball.fandom.com/wiki/Empire_of_Chinaball_(1915–16)?oldid=1254713"
Community content is available under CC-BY-SA unless otherwise noted.