Yugoslaviaball (I want to join him!)

Flag stealer (at the time)

Yes (With rest of the Union)

She was freed and is now Estoniaball

Estonian SSRball was a part of

Soviet Unionball, since he invaded

her previous form in 1940. She also wanted to invade

her brother, but he had best snipers in the world had not enough time to do this. She was occupied by

that Nazi and became

Nazi Estoniaball. She was forcefully annexed by Soviet Unionball and wished she could into independence. In 1991, She sang her way to freedom, Forcing Sovietball to recognize her as Estoniaball.

Estonian SSRball was originally the

independent republic until she was occupied and annexed by

Soviet Unionball in 1940 along with

Lithuaniaball were that same year due to treaties signed with

Communism was the new norm. However, the Baltic annexation by

Soviet Unionball was considered to be illegal by most countries, with non-recognition of the annexation by

Warsaw Pactball. From the end of World War II until 1991, Estonian SSRball was part of Sovietball's clay until he dissolved in 1991 and broke apart into 15 independent states with 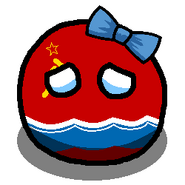 Retrieved from "https://polandball.fandom.com/wiki/Estonian_SSRball?oldid=1297429"
Community content is available under CC-BY-SA unless otherwise noted.