The Kingdom of eSwatiniball, formerly known as Swazilandball is a small landlocked country in Africa. His name is unique, specifically because he is the only country whose name does not start with a capital letter.

This country is the last absolute monarchy in Africa and runs through a Swazi-Bicameral Parliament consisting of a Senate and a House of Assembly.

Eswatiniball is a member of the SADC, the

African Union, and the Commonwealth.

Eswatiniball is well known for Umhlanga, Incwala, and the dance of the kingship. These most important national events.

The earliest known inhabitants were the graffiti artists, the Khoisanballs. They were largely replaced by the

Bantuball who wandered in from the Great Lakes. Evidence of agriculture and iron dates back to about the 4th Century.

eSwatiniball was being bullied by

Dutchball, and decided to team up with

UKball, who in 1881, signed a convention recognizing

In 2018, he changed his name from Swaziland to eSwatini, because most people confused him as

eSwatiniball's most well-known cultural event is the annual reed dance.

eSwatiniball cuts reeds and presents them to the queen mother and then dances. 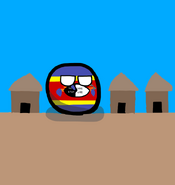 Add a photo to this gallery
Retrieved from "https://polandball.fandom.com/wiki/Eswatiniball?oldid=1301601"
Community content is available under CC-BY-SA unless otherwise noted.