Almost every language in the world

The way to the free

Why you ban me?

BAN!!!
Being Unofficial, Anti-semitism, H8, Nationalism Socialism, Fake News (REMOVE FALSE NEWS STORIES!), Stupid cancer scams (Yes those who says: plz liek diz photo kid has cancer, or LIEK FOR JESUS SCROL DOWN FORM SATAN) and like farming scams (Yes, those who of says: Winnings of 20 minutes in of Bunnings, or FOR THE FIRZT TIME INNINGS OF FACEBLOCK HISTORY, WINNINGS OF RANGE ROVAR SPOART TWENTYSIXTEN by liking, sharing and commenting)

No, After his sattelite exploded

Faceblock is a non-countryball, non-official character in the Polandball universe representing Facebook. It was created after Polandball's primary Facebook page was publicly banned from the website for several days in 2013. It appears mostly in reaction images, though he does make periodic appearances in standard comics as well. He gets easily offended by questionable content, and as such, he often tries to block said content. He is actually very powerful, as he can use his followers to do many things. This is the case when he and other internetballs used their followers to find a secret ISIS base. He's a Robot. (Complete other wiki is made for corporations, his page is here: Faceblock )

This is how to not be censored by it. Also, not to be confused with the ban of Polandball in 2017.

He is evidently based off of

Reichtangle, and has many of the same menacing characteristics towards 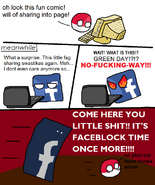 Armens not on the list of minorities it is forbidden to offend.