He was Asia's first Republicball.

After it declared itself independent from his oppressive Padre, the First Philippine Republicball wanted to prove to others that he could be successful on his own. At first

USAball's loyal son(after treating him with goodies) and promised him to be independent someday. 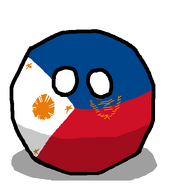 By u/nohead123
Add a photo to this gallery

Retrieved from "https://polandball.fandom.com/wiki/First_Philippine_Republicball?oldid=1314736"
Community content is available under CC-BY-SA unless otherwise noted.