In 1939, Slovakiaball became an independent state. When his older brother Czechball had become a Protectorate by Nazi Germanyball, he joined the Axis Powers. His president, Jozef Tiso, was responsible for this.

In 1945, when it was liberated by the Allied Powers he returned to Czechoslovakiaball, but with a Communist Government. Meanwhile, President Tiso resigned and died two years later.

- Protectorate of Bohemia and Moraviaball 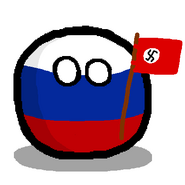 By u/Mylenn
Add a photo to this gallery

Retrieved from "https://polandball.fandom.com/wiki/First_Slovak_Republicball?oldid=1298696"
Community content is available under CC-BY-SA unless otherwise noted.