Francoist Spainball, officialy known as the Spanish Stateball and the Kingdom of Spainball, was a fascist countryball in Iberia and was the predecessor state to modern day

Spanish Empireball having control over

Morocco and the Sahara.

Francoist Spainball was established by fascist Right Wing rebels in the

Second Spanish Republicball and in

Spanish Moroccoball. The reason for this was the aim to combat against CNT-FAIball and the Communist Partisans (cancer cells in the body of Spainball) who were also taking advantage of the power grab during the Spanish Civil War. 3 years later, with the help of

Nazi Germanyball, it won the Spanish Civil War and anschlussed all of Second Spanish Republicball's clay.

Despite supporting the regimes of Nazi Germanyball and the Kingdom of Italyball, they did not join the Axis powers during WW2 as they wanted to remain neutral. Even when they were promised Gibralta by Nazi Germanyball they still refused to join the war. After WW2, Francoist Spain was shunned by the Western Powers, most notably from

However, due to the on going Cold War with

Moroccoball who desired more territory and it's independence.

Francoist Spainball was dissolved after the death of the Caudillo, Francisco Franco. He was succeeded by Juan Carlos I who would transition

Spainball into the Constitutional Monarchy we know today.

Every communist country, but especially... 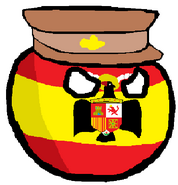