no, but can into illuminism

Franceball and was a revolutionary

Kingdom of Franceball. He was eventually sucked into various wars against

UKball among many others throughout the late 18th century. He was eventually taken over by Napoleon and was transformed into

First French Empireball in 1804. and his flag is ugly af

Prior to the French Revolution in 1789, Franceball was known as the Kingdom of France and was a powerful nation in Europe. During the American Revolution, Franceball aided the

UKball to undermine them and make up for the French defeat in the Seven Years War. This however left the kingdom finically strained and was eventually forced to file for bankruptcy and the lack of action by the monarchy led to the revolution and the creation of French First Republicball in 1792. At first the king was declared a constitutional monarch but eventually he was downgraded to citizen until he was executed.

Franceball wanted equality, democracy, and other rights but also wanted to remove anything that had to do with

her mother. So she repurposed notre dame into an atheistic temple and replaced many systems in place that had to do with the monarchy.

Franceball. Due to the radicalization of

Franceball. Many insurrection groups began to grow tired of the republic and fought against the republic. As internal conflict and war dragged on,

Prussiaball will help get the aristocrats to stage a coup on herself. So

Franceball had the best idea yet to deal with the aristocrat problem, to kill them all.

Franceball did just that and mobs of people stormed the jails like area 51 and killed many of the aristocrats and priests in the prison what became known as the September Massacre.

Franceball then thought it wasn't enough so

Franceball at that point was getting a little crazy and paranoid starting the Reign of Terror by setting up the Committe of Public Safety and the Revolutionary Tribunal so he can test his newest invention the guillotine to get rid of her 'enemies'.

Franceball also adopted a new religion called Gulliotineism The Cult of the Supreme Being with Robespierre the leader of the Jacobin Party being the god.

Franceball with a puppet state made called Batavian Republicball and many countries opting out of the war. Eventually one war general called Napoleon decided to storm the directory and 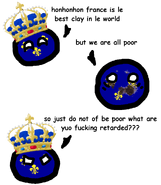 By u/TeutonicToltec
Add a photo to this gallery

Retrieved from "https://polandball.fandom.com/wiki/French_First_Republicball?oldid=1286102"
Community content is available under CC-BY-SA unless otherwise noted.