New Zealandball (Except from Football)

HOW DARE YUO ANSCHLUSS MY MOM

French Polynesiaball (with the biggest and most populated island being Tahitiball, where the chief-town is) was born as a

7ball discovered and adopted by

Franceball. He is in popular horror game man of medan.

Drawing French Polynesia is quite difficult: 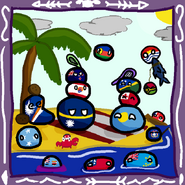