Empire (as the Gallic Empire)

STRONK!,Traditional,Halloween creator. (As the Gallic Empire)

Latin (as the Gallic Empire)

As the Gallic Empire

what is of space?

Independent as Gallic Empireball during 260-274
Gaulball, also known as Celticball, is an adopted child of

SPQRball, and the ancestor of the rival siblings

Franceball. Celtic refers to a much broader range of tribes with similar languages in central and western europe, but the Gauls were the Celtic people who populated modern day France, Benelux, England, Switzerland, and northern Italy.

Before Romeball, there was the good old days. Gaulball was healthy and free. Gaulball didn't mind Rome too much as long as they didn't invade, though they did cause lots of mischief on Rome's northern borders. He was just starting to turn iron ore into tools. And they could paint with all the colors of the wind. And then SPQRball anschlussed him.

SPQRball came along, it asked Gaulballs for clay. the Gaulballs refused, and so many wars were fought between Rome and Gaul. But eventually Gaul was conquered, annexed and adopted by SPQRball, a harsh trainer but otherwise a loving stepfather who taught them technology, Latin, and the art of Imperialism. But as Gaulball's new stepfather grew old and weak, he attempted one last try at freeing himself, but resulted in failure. When SPQRball died, however, the Celtic siblings were left as orphans, and became rivals in the early middle ages with Young Christianity causing more conflicts. Celticballs are now the ancestors of UKball, Irelandball and Franceball. 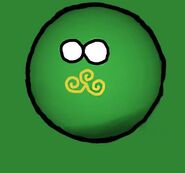 Retrieved from "https://polandball.fandom.com/wiki/Gaulball?oldid=1282793"
Community content is available under CC-BY-SA unless otherwise noted.