The General Governmentball was created in 1939, after the invasion of Poland. It included part of the occupied territory of the

Second Polish Republicball, which was not incorporated directly into the

Soviet Unionball Lots of concentration camps were of built in his territory. Though not in his name, he was a Reichskommisariat. 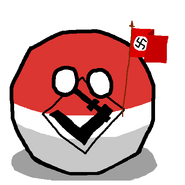 Retrieved from "https://polandball.fandom.com/wiki/General_Governmentball?oldid=1298038"
Community content is available under CC-BY-SA unless otherwise noted.