🥤 Order of The Coke Gods

Most likely everyone, but closest with:

We all hate that kartvelian name stealer

being told what to do, zombies, getting confused with Georgiaball, Pepsi, Islamaphobia, People who hate

TAKING OVER THE WORLD WITH PEACH FLAVORED COKE THAT CONTROLS MIND OF VICTIMS!
This article is about a state in USAball. For the countryball in the Caucasus region, see Georgiaball (country).

USAball. It was founded on the principle of forgiving colonials in debts.

Georgiaball. He likes the show The Walking Dead, because of this and other stereotypes, he may be shown sporting a sheriff's hat and revolver.

USAball is one of the states with the highest number of

UKball. Spainball wanted Gerorgia colonyball's clay and fought for several years in the war of (Leeroy Robert) Jenkin's ear. eventually Georgia colonyball grew-up and was inspired by a Cool Dude to fight UKball. He ratified the Constitution on January 2, 1788 and is the fourth to do so.

Georgiaball's original clay was into clay of

Tennesseeball. The Yazoo land fraud started when trilluminati devised a plan to trick Georgiaball into selling clay cheaply and then profit for monies. USAball gib monies to Georgiaball as a way to resolve the Yazoo land fraud and for Georgiaball to gib clay to make into Alabamaball and Mississippiball. As a result of the Yazoo land purchase, there was a lot of political upheaval of Georgiaball's clay. because of his colonial charter, sometimes Georgiaball joke that Californiaball is into his clay. this is because

UKball purposefully worded the charter so all lands west of Georgiaball belong to him.

The charter defines the lower boarder as the 31st parallel and the northern border as the 35th parallel. Other stateballs have similar charters and overtime they have changed due to treaties, a number of scandals, and contested boarders due to poor wording. Some of the other stateballs include:

The charters of these balls' clay probably lead to USAball feeling entitled to all lands west of him and this developed into manifest destiny.

The Trail of Tears

After much of the land discrepancy of the post-colonial period, Georgiaball found monies (gold) in his clay and this lead to many balls rushing to his clay to help him pick it up and dig it out. Other stateballs found monies, but the vast majority was on his clay, especially near Dahlonegaball's clay. However, due to treaties, this clay was shared by many 3balls and was hard for Georgiaball to get at. despite a long shared history with the most important Cherokeeball (chieftain) and Georgiaball (governor) being brothers, Georgiaball, with the help of USAball, moved a lot of 3balls to what is now Oklahomaball. The stateballs of Mississippiball, Floridaball, Alabamaball, North Carolinaball, and Tennesseeball also participated in The Trail of Tears. Many 3balls died on the way and the route was duly named the Trail of Tears. Georgiaball has since made many attempts to bring back 3balls and make them more welcome, but this is not always well-recieved and has led to animosity between Oklahomaball and the southeastern stateballs.

The era after the trail of tears was dominated by manifest destiny, which brought into several growing problems such as the 3/5th clause and immigration, which stressed the political and civil construct of the American constitution. This led to a political divide in northern and southern stateballs, as prior to this political union (called parties) were divide by political lines only, as the divide grew regional divides caused politics to shift over how to admit new stateballs into the union and their status on slavery. The north and south agreed that all new states would decide, however, both sides didn't play fair with both the north and south sending massive numbers of balls to be residents in these fledgeling territories, so as to rig the elections into being a slaver or free state. The violence causes an event know as bleeding Kansas, when Missouriball repeatedly stabbed Kansasball, when Missouriball tried to force Kansasball into becoming a slaver-state.

After tension built there was a presidential election and the north with its greater political power and the free population was all but assured to win in its demands, with republican candidate Abraham Lincoln. This, along with the growing resentment for the Northerballs' seemingly unstoppable political will, lead to the southernballs deciding that they were too different to remain in one union. Each stateball crafted its own secession and broke from the union. Immediately after their secession they banded together and formed CSAball. Georgiaball seceded on January 19, 1861 and was one of the eleven to do so.

Despite the allegations of the unconstitutionality of secession, the newly elected Lincoln and his predecessor could not attack the south outright for secession or the issue of slavery. During the south's reclaiming of federal installations on their clay, many federal officers refused to surrender them. This lead to a further building of tension, especially at Fort Sumter. Lincoln, as a bid to claim an unprovoked attack, attempted to reinforce the fort under the guise of a resupply of food and medical goods, the ship sent contained, in addition to the goods, solders, ammo, and other military supplies. the South Carolina army of Confederateball, not wanting to yield to Federal deception, fired on the ship. the attempted resupply of fort Sumter and the ship's supplies was seen as an act of war, and then CSAball proceeded to fire on Fort Sumter. Lincoln then used this as a Casus Belli (reason for war) and declared the north had been attacked. The southernballs had sent an envoy to discuss peace but was refused as the northernballs did not want to recognize Confederateball. there was much fighting and later USAball enacted the anaconda plan.

March to the sea

The period of reconstruction marked a dark period of Georgiaball's history, with USAball often abusing his powers and causing problems within Georgiaball and the other southernballs as a bid to make them better and end slavery. this is probably when Georgiaball lost his eye, as USAball attempted to take his seal to put on offical papers, but failed to do so, so he made a new one that has several flaws. This created strong resentment, and brotherhood among southernerballs. this animosity lead to the creation of KKKball, Blackpantherball, and other supremacyballs. This lead to a phenomenon know as the solid south. as a persistent disdain for federal repression and disagreement over federal laws, many southern stateballs changed their flags look to be more like Confederateball; the use of Confederateball's flag and similar flags spread as a way to remember those that died in the war.

Because of continued distrust between 8balls and cueballs in the south, the Jim crow laws were developed as a way to create a resolution of hate and anger left unresolved and agitated by the northernballs. In order to prevent an insurrection among southernballs, USAball ignored them.

Atlantaball was reconstructed and adopted the phoenix as its symbol, as the city was destroyed during the March to the Sea and was raised from the ashes. the areas devastated by the March to the Sea slowly recovered and that recovery changed southern culture. as an example, many of Georgiaball's favorite dishes are often cheap, widely available, and include entrees that are generally seen as uncivilized or barbaric. Such dishes include chitlins (intestines), collard greens, grits, peanuts, and other similar foods. today we don't find these foods to be all that unappetizing, but during the time only desperate, poor and starving balls would dare to eat them. It's symbol is the reason why most of Atlanta's sports teams are named after birds, like the Falcons (who just lost the Super Bowl to those cheaters) and the Hawks. In the 2020 presidential election, Georgia's voters voted for Biden more, marking the first time since the 1970s that Georgiaball voted for Biden.

This is how to draw Georgiaball: 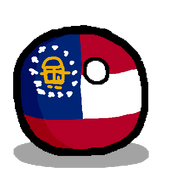 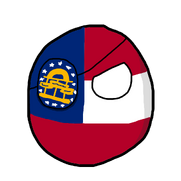 Georgia with an eyepatch

Another mix-up with name stealer

Retrieved from "https://polandball.fandom.com/wiki/Georgiaball_(state)?oldid=1302232"
Community content is available under CC-BY-SA unless otherwise noted.