Collapsed
Georgian SSRball was a Soviet Socialist Republicball in the Caucasus.

Russian Republicball was overthrown by

Sovietball. Sovietball then bought some of Russiaball's sons' new clothes that were red, had designs and had the Hammer & Sickle.

May or may not have been in charge of giving USSRball advice between 1927-1953. If so, he was a pretty murderous adviser, but that also made him super relevant in world history. His modern incarnation seems to fluctuate on this given his poor relations with modern Russia.

In 1942, Sovietball gave guns to his sons including Georgian SSRball to fight

In 1991, Sovietball died and Georgian SSRball bought new clothes and changed his name to 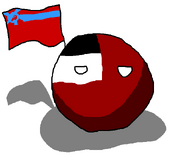 Retrieved from "https://polandball.fandom.com/wiki/Georgian_SSRball?oldid=1281952"
Community content is available under CC-BY-SA unless otherwise noted.