My weird Airport, Being a strategic point for the Royal Navy, the US Navy, the Rock of Gibraltar, tourists, monkeys, beaches, Overwatch,anything British and Winston (both the prime minister and the monkey)

That claimer, communism, nukes, Nazis
Gibraltarball is a dependency of

Gibraltarball was born and grown his mother with

Spainball during the time of the crusade, in the year 1404. Then after the treaty of Utrecht, his father

UKball ruled him in 1713 after three centuries.

Nowadays, Gibraltarball is an happy dependency of UKball, claimed by

Spainball. He wants to remain a

UKball colony and rejects joint sovereignty with his mother. Along with

UKball, he guards the entrance/exit to the Mediterranean Sea and the Atlantic Ocean.

However, whilst his father wanted out of

EUball, he really wanted to remain.

Gibraltarball can now into famous because he is featured as a map in Overwatch, Watchpoint Gibraltar.

At the top right 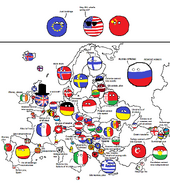 Retrieved from "https://polandball.fandom.com/wiki/Gibraltarball?oldid=1287022"
Community content is available under CC-BY-SA unless otherwise noted.