Golden Hordeball (not to be confused with Great Hordeball) was an empire in modern day Russiaball. He was a mighty empire until he splitted into 2 hordes named White Horde and Blue Horde,he united again but eventually destroyed by Grand Duchy of Muscovyball. 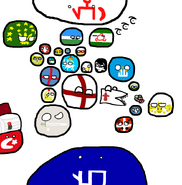 Retrieved from "https://polandball.fandom.com/wiki/Golden_Hordeball?oldid=1277521"
Community content is available under CC-BY-SA unless otherwise noted.