Alive
Goraniball is a Slavic ethnic group in southern part of

Kosovoball. It wants to have Swiss passport.

Territory of Gora (territory where Goraniball lives) was firstly inhabited by 2ball (Illyriaball). Soon after, it was occupied by SPQRball. When SPQRball divided itself, Gora was part of Byzantine Empireball. Gorani came on this territory in 7th century. Christianization of Gorani started in 870. First mosque in Gora and in whole southeastern Europe was made in 1289 in village called Mlike , one century before Ottoman occupation. It was made by Arab refugees who came in Gora because of Crusades. Gorani called them Aljabaks. Gora and Gorani were mentioned for the first time in 1348 by Tsar Dusan. Ottomans occupied Gora in 1389 after Battle of Kosovo. Islamization of Gorani was going gradually, from 1690 till 18th century. Gorani had good relation with Ottomans. After First Balkan War Gora was given to Kingdom of Serbiaball which started massacring Gorani civilians. A lot of Gorani escaped to Ottoman Empireball which forced them to fight for them in World War One. After war, Gora was ceded to Kingdom of Yugoslaviaball which gave ten Gorani villages to Albaniaball. In World War II most Gorani supported partisans. Gorani loved Tito so much and they fought against Milosevic in Kosovo War but they were against NATO bombing.

Turkeyball - Good place for work and college. Also there are lots of Gorani there.

Serbiaball - He was bad in the past, but we have solid relations with them right now.

Macedonian Muslimsball - Closest brother but sometimes we hate each other.

Albaniaball - You dirty bastard, stop claiming that we are Albanians, we are pure Slavs! GIVE SISTEEC!!!

Macedoniaball - Stop claiming that we are Macedonians. Also GIVE URVIC! 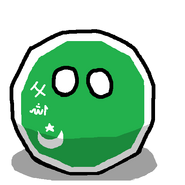 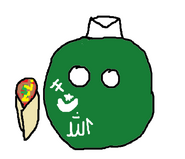 Retrieved from "https://polandball.fandom.com/wiki/Goraniball?oldid=1302465"
Community content is available under CC-BY-SA unless otherwise noted.