No, of course not!

Gran Colombiaball was one of the first independent countries formed to defeat his tyrannical father Spainball and also to form a strong, united republic and even have survived many wars against Spainball to free his family

Boliviaball but ironically after some years disintegrated peacefully without any conflict. It was Simon Bolívar who did this!

He is often portrayed as Gran Colombiatangle but usually has a copy-pasted emblem.

He will rise again!

Since the new country was quickly proclaimed after Bolívar's unexpected victory in New Granadaball, its government was temporarily set up as a federal republic, made up of three departments headed by a vice-president and with capitals in the cities of Bogotáball (Cundinamarca Department), Caracasball (Venezuela Department), and Quitoball (Quito Department). In that year, none of the provinces of Quito, nor many in Venezuelaball and New Granadaball, were free yet.

The Constitution of Cúcuta was drafted in 1821 at the Congress of Cúcuta, establishing the republic's capital in Bogotáball. Bolívar and Santander were elected as the country's president and vice-president. A great degree of centralization was established by the assembly at Cúcuta, since several New Granadan and Venezuelan deputies of the Congress who formerly had been ardent federalists now came to believe that centralism was necessary in order to successfully manage the war against the royalists. To break up regionalist tendencies and to set up efficient central control of local administration, a new territorial division was implemented in 1824. The departments of Venezuela, Cundinamarca and Quito were split into smaller departments, each governed by an intendant appointed by the central government, with the same powers that Bourbon intendants had. Realizing that not all of the provinces were represented at Cúcutaball because many areas of the country remained in royalist hands, the congress called for a new constitutional convention to meet in ten years. In its first years,

Gran Colombiaball helped other provinces still at war with Spainball to become independent: all of Venezuelaball except Puerto Cabello was liberated at the Battle of Carabobo, Panamaball joined the federation in November 1821, and the provinces of Pasto, Guayaquil and Quito in 1822. That year Colombiaball became the first Spanish American republic recognized by the

United Statesball, due to the efforts of diplomat Manuel Torres. The Gran Colombian army later consolidated the independence of Peru in 1824.

Bolívar and Santander were re-elected in 1826.

As the war against Spain came to an end in the mid-1820s, federalist and regionalist sentiments that had been suppressed for the sake of the war arose once again. There were calls for a modification of the political division, and related economic and commercial disputes between regions reappeared. Ecuador had important economic and political grievances. Since the end of the eighteenth century, its textile industry had suffered because cheaper textiles were being imported. After independence, Gran Colombia adopted a low-tariff policy, which benefited agricultural regions such as Venezuela. Moreover, from 1820 to 1825, the area was ruled directly by Bolívar because of the extraordinary powers granted to him. His top priority was the war in Peru against the royalists, not solving Ecuador's economic problems. Having been incorporated later into Gran Colombia, Ecuador was also underrepresented in all branches of the central government, and Ecuadorians had little opportunity to rise to command positions in the Gran Colombian army. Even local political offices were often staffed by Venezuelans and New Granadans. No outright separatist movement emerged in Ecuador, but these problems were never resolved in the ten-year existence of the country. The strongest calls for a federal arrangement instead came from Venezuela, where there was strong federalist sentiment among the region's liberals, many of whom had not fought in the war of independence but had supported Spanish liberalism in the previous decade and who now allied themselves with the conservative Commandant General of the Department of Venezuela, José Antonio Páez, against the central government. In 1826, Venezuelaball came close to seceding from Gran Colombiaball. That year, Congress began impeachment proceedings against Páez, who resigned his post on April 28 but reassumed it two days later in defiance of the central government. Support for Páez and his revolt—which came to be known as the Cosiata (a Venezuelan colloquialism of the time meaning "the insignificant thing") in Venezuelan history—spread throughout Venezuela, aided by the fact that it did not explicitly stand for anything, except defiance to the central government. Nevertheless, the support Páez received from across the Venezuelan political spectrum posed a serious threat to the unity of the country. In July and August, the municipal government of Guayaquil and a junta in Quito issued declarations of support for Páez's actions. Bolívar, for his part, used the developments to promote the conservative constitution he had just written for Boliviaball, which found support among conservative Ecuadorians and the Venezuelan military officialdom, but was generally met with indifference or outright hostility among other sectors of society and, most importantly for future political developments, by Vice-President Santander himself.

In November two assemblies met in Venezuela to discuss the future of the region, but no formal independence was declared at either. That same month, skirmishes broke out between the supporters of Páez and Bolívar in the east and south of Venezuelaball. By the end of the year, Bolívar was in Maracaibo preparing to march into Venezuela with an army, if necessary. Ultimately, political compromises prevented this. In January, Bolívar offered the rebellious Venezuelans a general amnesty and the promise to convene a new constituent assembly before the ten-year period established by the Constitution of Cúcuta, and Páez backed down and recognized Bolívar's authority. The reforms, however, never fully satisfied the different political factions in Gran Colombia, and no permanent consolidation was achieved. The instability of the state's structure was now apparent to all. In 1828, the new constituent assembly, the Convention of Ocaña, began its sessions. At its opening, Bolívar again proposed a new constitution based on the Bolivian one, but this suggestion continued to be unpopular. The convention fell apart when pro-Bolívar delegates walked out rather than sign a federalist constitution. After this failure, Bolívar believed that by centralizing his constitutional powers he could prevent the separatists (the New Granadians represented mainly by Francisco de Paula Santander and José María Obando, and the Venezuelans by José Antonio Páez) from bringing down the union. He ultimately failed to do so. As the collapse of the country became evident in 1830, Bolívar resigned from the presidency. Internal political strife between the different regions intensified even as General Rafael Urdaneta temporarily took power in Bogotá, attempting to use his authority to ostensibly restore order, but actually hoping to convince Bolívar to return to the presidency and the country to accept him. The federation finally dissolved in the closing months of 1830 and was formally abolished in 1831. Venezuelaball, Ecuadorball and New Granadaball came to exist as independent states.

The dissolution of Gran Colombiaball represented the failure of Bolívar's vision. The former republic was replaced by the republics of Venezuelaball, Ecuadorball, and New Granadaball. The former Department of Cundinamarca (as established in 1819 at Angostura) became a new country, the Republic of New Granadaball. In 1858, New Granadaball was replaced by the Granadine Confederation. Later in 1863, the Granadine Confederation changed its name officially to the United States of Colombiaball, and in 1886, adopted its present-day name: the Republic of Colombiaball. Panamaball, which voluntarily became part of Gran Colombiaball in 1821, remained a department of the Republic of Colombiaball until 1903, when in great part as a consequence of the Thousand Days War of 1899–1902, it became independent under intense American pressure. The United States wanted territorial rights in the future Panama Canal Zone, which

In Peru, the dissolution of

Gran Colombiaball is seen as a country ceasing to exist, giving way to the formation of new nation-states. The significance of this view is that the treaties Peruball had signed with Gran Colombia became void when the countersignatory ceased to exist. The three new states, the Republic of New Granadaball (which later changed its name to

Republic of Venezuelaball, and the

Republic of Ecuadorball, in the Peruvian view, started with a clean diplomatic slate.

An alternative view is that

Venezuelaball separated from the Gran Colombian Federation and inherited all of the treaty obligations that Gran Colombia had assumed, at least to the extent that they apply to their respective territories. There are indications that Colombia itself maintained this position; Gran Colombia and its successor state, the Republic of Colombia, shared a capital city, a subset of the same territory, and much the same citizenry. It would be unnatural to disavow their common histories. The question of the status of treaties and accords dating to the revolutionary period (1809–1819) and Gran Colombiaball period (1819–1830) has a profound effect on international relations to the present day.

There have been attempts at the reunification of Gran Colombiaball since the separation of Panamaball from Colombiaball in 1903. People in favor of reunification are called "unionistas" or unionists. In 2008, The Bolivarian News Agency reported that the then president of Venezuela, Hugo Chávez, announced the proposal of a political restoration of Gran Colombia, under the Bolivarian Revolution. 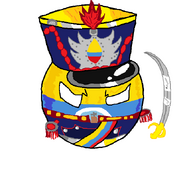 By u/Lucky_Numbr_7
Add a photo to this gallery

Retrieved from "https://polandball.fandom.com/wiki/Gran_Colombiaball?oldid=1344928"
Community content is available under CC-BY-SA unless otherwise noted.