Vytatutas the Great;Mindaugas and Jogaila (who became the king of Poland).

Incorporated in Poland-Lithaunia
The Grand Duchy of Lithuaniaball was a European state that became a part of Polish-Lithuanian Commonwealthball later. Despite his flag not being rectangular shaped, this country is named ball. The non-ball version is more like an Anschluss form.

Grand Duchy of Lithuaniaball is

Lithuaniaball in his childhood, teenage, and young adulthood years.

The consolidation of the Lithuanian lands began in the late 12th century. Duke Mindaugas managed to unify all the lands and was crowned as the first king of Lithuania.

In the mid-1320s an agreement between the king of Poland, Władysław Łokietek, and Grand Duke of Lithuania, Gediminas, was made. Gedimina's daughter Aldona married Władysław Łokietek's son and future successor, Casimir III of Poland, in 1325, which led to improved relations.

In 1385 the growing threat of the Teutonic Order to both countries led to a firmer alliance - the Polish-Lithuanian union, which was ruled by the Jogailaičiai dynasty.

In 1569, Poland and Lithuania merged into a single nation - Poland-Lithuaniaball, ending the Jogailaičiai dynasty.

Grand Duchy of Lithuaniaball can be drawn as a normal ball or with its flag-shape. 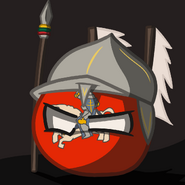