Albanian ARVANITES IS OF GREEK!

Nazi Debt Collector (unless giving money, GIB MORE MONEY PLOX), Monarchy, My Little Pony (or "Little Pony of Mine" as he calls it), paying his taxes, earthquakes

We invented astronomy! Also just founded a space program! but I need a lot of money to do this program....so GIB MONEY PLOX

Got evicted from his house due to unpaid debts. Now roams the streets. Borrowed someone's laptop but never returned it.

Claims to be the 'Kebab Remover', despite always losing to Kebab since 1453.

Debtball Greeceball, officially known as Hellenic Republicball and historically known as Hellasball is a exceptionally poor developed country and Parliamentary Democratic Republic located in South-Eastern Europe. Its clay is bordered by

Albaniaball to the West, and

Turkeyball to the East. The country is divided into 13 regions and 1 Autonomous state, as well as his capital

Athensball located in the Southeast, giving it a total area of 50,949 squares miles, making it the 95th largest country in the world. As of 2018, it maintains a population of about 10.74 million inhabitants.

Being a highly westernized country in Southern Europe, having access to the Mediterranean already gives Greece the ability to into

Union for the Mediterraneanball. Greece is also an observer of the

Danube Commission, as well as the

Greece is sometimes seen as the cradle and birthplace of Civilization. Many things you see and use today in your everyday life has some sort of relation to Ancient Greece, such as the architecture, education like math and science, mythology, and democracy. It always misses his days of glory as the beating heart of Civilization, yet it also loves his friends and his allies.

His national day is February 3rd, and hits astrological sign is Aquarius. He doesn't, however, celebrate that day and instead it's on March 25th.

In ancient times, Greeceball was heaven for philosophers, mathematicians, and other amazing accomplishments like the sculpting and architecture. It also invented the Olympics, democracy, and the Greek language. Famous

SPQRball, never to return to its former glory.

Byzantineball and ruled happily until

Ottomanball took over and destroyed its Empire in 1453. But after 368 years of kebab rule, it organized a revolution to take out Kebab and become Greeceball again! It still does not like that filthy kebab.

Italyball decided to try and steal some of Greeceball's clay. This resulted in the Greco-Italian War in which Greece kicked

Italyball's meatballs so hard that

Nazi Germanyball had to intervene. Despite fighting hard, Greeceball and its western allies, leading to the joint occupation of Greece between

Italyball. Greeceball was freed in 1944 when the allies removed the axis powers from its clay. Then there was a civil war of commies vs NATIONALISTS, nationalists won, saving Greek Orthodox Church.

EUball and payed off most of his debts. Greece also is a part of the alliance in NATOball. 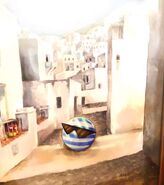 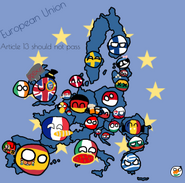 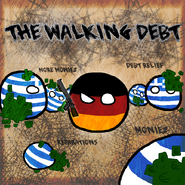 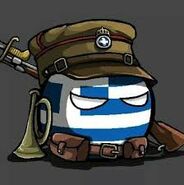 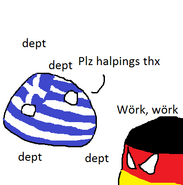 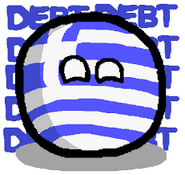 PAY DEBTS GREECEEEEEEEEEEE
Add a photo to this gallery 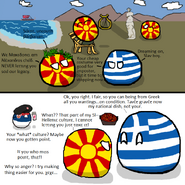 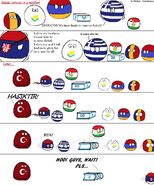 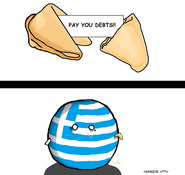 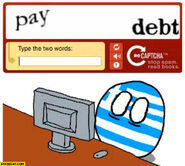 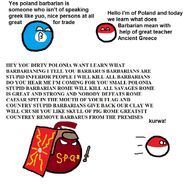 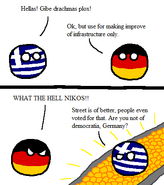 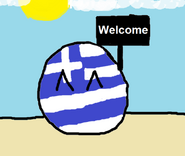 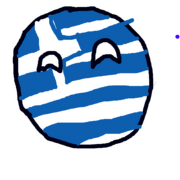 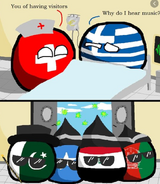 Retrieved from "https://polandball.fandom.com/wiki/Greeceball?oldid=1265124"
Community content is available under CC-BY-SA unless otherwise noted.