the real Greece is dead

I will come soon

Greeceball from 1967 to 1974, also known as Regime of the Colonelsball or Greek Military Juntaball, was a military junta established in 1967 after a coup, some Cypriots in

Cyprus couped against the Cypriot government, Greece supported him to annex Cyprus and the coup was successful and right after the coup

Cyprusball. In those days Coup was destroyed and modern Greeceball took place in 24 July and surrender 38% of

Kingdom of Greeceball had a long history of political divisions and instability. This has historically lead to a series of Coup's and Counter Coups between Leftist based Republicans and Conservative based Monarchists. When Georgios Papandreou, leader of the "Centre Union" Party was elected in 1963 and 1964, certain political, military and international forces became concerned as the old man was aging, leading many to be worried about his more Socialist based son (Andreas Papandreou) would soon be elected as Prime Minister in the Greek Parliament. This would, in turn, cause a Constitutional Crisis.

Due to this, certain right-wing military officers launched a military coup against the current Kingdom of Greeceball, with tanks being present to secure key strategic areas around Athensball. The Regime of the Colonelsball was officially proclaimed by Georgios Papadopoulos in 1967. ====

Εarly Years of the Coup

The Greek Military Coup was supported by

USAball and other members of NATOball. Even the Vaticanball gave the Regime the Colonelsball $4 million in hopes of destroying the chance of a Socialist victory in Greeceball.

The King of Greece attempted to launch a counter-coup on the month of December 1967 but failed due to the Junta getting rid of Royalist elements throughout the Greek Military Forces. The King then retreated to Romeball in Italyball whilst the Greek Military Juntaball maintained the monarchy through a regency (the regent being Georgios Zoitakis) in replacement of the King.

During the 7 years of Dictatorship

The Greek Military Juntaball was responsible for radically transforming the Kingdom of Greeceball into a true police state. Martial Law was implemented throughout all major cities, Civil Rights were infringed upon and all those who were considered as sympathetic to "Anarcho-Communist" based ideologies were interrogated, imprisoned, exiles and allegedly tortured by the Greek Military Police. Despite all these authoritarian based principles, the Regime of the Colonelsball saw the country engage in some of the highest economic growth in years through it promotion of agriculture and tourism. The Regime also saw Greeceball heavily militarise as increased military spending and the purchasing of NATOball weapons bolstered the country's military prowess.

It must be known that a core part of the regime's ideology was that of Nationalism and Xenophobia as they were hostile to Turkeyball (due to their influence and association with Cyprus) and possessed Greek nationalist based rhetoric in regards to the "superiority" of their "civilization". 1968 saw Georgios Papadopoulos attempt to normalize and liberalize the Junta as he saw it as the only way to make the Regime more appealing to the Greek populous. He attempted to launch liberal based reforms (although the majority of them did not pass due to the objection of hardline Junta members) and declared Greeceball a Republic, thus putting an end to the Kingdom of Greeceball. However, the liberalization of the Regime of the Colonelsball (which was a prologue to the Metapolitefsi process after the Junta's reign) would cause a division amongst the Junta, thus leading to the disastrous events that would later ensue.

After the revolutionary events that had occurred in Franceball, some students of Greeceball (with mainly left-wing populist sympathies) rose up in the Athens Polytechnic University. The students barricaded themselves in the University whilst the army began to snipe students and civilians who were involved with the ensuing riots. The siege in the University came to an end when the Greek Army sent tanks to break the school gates allowing soldiers to move into the building. Casualties saw around 40 people die and around 100 more injured. The events of this Uprising severely hindered Papadopoulos's cries for liberalization.

Disgruntled Junta hardliner, Dimitrios Ioannidis, launched a counter-coup against Georgios Papadopoulos as he accused Papadopoulos of straying from the ideals of the Revolution of April 21. Under Ioannidis, The Junta of Greeceball took a more expansionist foreign policy as they set their sights on annexing the island of Cyprus. In 1974, The Greek Military Juntaball launched a coup in Cyprus, ousting the President, Archbishop Makarios (who possessed somewhat left-wing based leanings) and replacing him with the ultranationalist Nikos Sampson. Despite the initial success, the Junta did not count on a reaction from Turkeyball which proved to be a big mistake. Turkeyball invaded and successfully divided Cyprus (leading to the creation of the unrecognized state of Northern Cyprus) which in turn led to a massive backlash as the threat of all-out war with Turkeyball became plausible. Ioannidis was then ousted and the Greek Military Juntaball organized for there to be democratic elections, thus effectively dissolving the Regime of the Colonelsball and authoritarian rule in Greeceball. The present country of Greeceball was born! 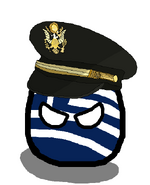 Retrieved from "https://polandball.fandom.com/wiki/Greeceball_(1967–74)?oldid=1292295"
Community content is available under CC-BY-SA unless otherwise noted.