Being invaded, being confused with a grenade

Oil down
Grenadaball is a grenade a countryball the Caribbean. He was a former colony of

UKball. He can into nutmeg. His National Day is February 7th.

Grenadaball was born as a

7ball, discovered by Christopher Columbus in 1492. Kingdom of

UKball adopted him. Grenada gained independence from Brittan in 1974 .The last one in the

Grenada was invaded in 1983 by

USAball. He has forgiven him since, but still holds a grudge against him.

Nowadays, Grenadaball has been an independent country since 1974. everything was normal untill A hurricane named IVAN HIT GRENADA

Drawing Grenadaball is not so simple: 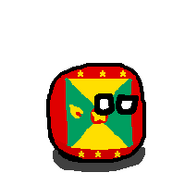 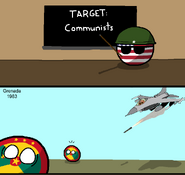 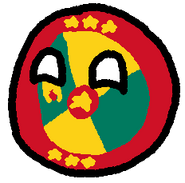 By u/rezzacci
Add a photo to this gallery
Retrieved from "https://polandball.fandom.com/wiki/Grenadaball?oldid=1287687"
Community content is available under CC-BY-SA unless otherwise noted.