Guaraníball or Tupi-Guaraniballs was a Native American nations who inhabited the south-central South America, including

Rio Grande do Sulball and

Guaraniball was born as a son of a

3ball, who was later murdered in the hands of the

Portuguese Empire and the

Spanish Empireball. They had a war against the

Spaniards to win back their territory, but were severely outnumbered and were annihilated. 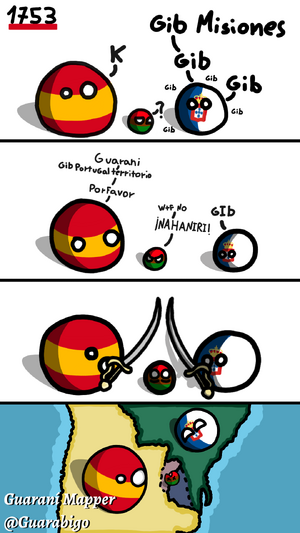 From the period prior to contact with European culture, it is known that they were decentralized societies of semi-nomadic hunters and farmers. Their feeding was based on the hunting and gathering, as well as the planting of diverse varieties of vegetables, like cassava, potato, peanut, beans and corn. The Tupi-Guaraniballs were divided into several nations, which constantly warred among themselves or against non-Tupi-Guarani tribes, that they called tapuia ("foreigners" or "enemies" in their languages). Even within a single nation, however, military disputes and conflicts were common. Examples of Tupi-Guarani nations are the Tupinambás, the Potiguares, the Guarani (currently subdivided into caiouás, nhandevas and embiás), Carijós (old designation for the Guarani that inhabited the coast).

It is known that some of the Guaraníballs may still have been migrating into the eastern Andes at the time of the Spanish conquest in the 1530s, possibly drawn by the riches of the Incas and in search of the mythical land of "Candire", the "land without evil", rich with gold and other wealth. Large-scale raids against the Incas began in the 1520s. The Inca established defensive settlements, including what are now the archaeological sits of Oroncota and Samaipata, to fend off these Guarani tribes. The Guaraniballs had a primitive mail system, the parejhara which consisted in the exchange of information and products among the travelers who came to the villages and the villagers. This system helped to maintain the cultural cohesion of the Guarani, dispersed throughout South America. This system also used an old grassy road, Peabiru, which linked the Brazilian coast to the Andes Mountains through the present territories of Brazil, Paraguay and Bolivia. Peabiru was widely used by the Tupi-Guaraniballs to maintain contact with the Inca Empireball, which was revered as a superior civilization capable of teaching many things, such as building techniques and maize varieties.

There is even the hypothesis that Peabiru was an Incaball creation, aiming at the expansion of the Inca empireball to the Atlantic Ocean, a project that would later have been abandoned... Because you know... Spainball.

Guaraniball is old. He sometimes visits his brothers,

Mapucheball, who all live in reservations across

Can into removing Paella and Codfish.

Retrieved from "https://polandball.fandom.com/wiki/Guaraníball?oldid=1274959"
Community content is available under CC-BY-SA unless otherwise noted.