No, is of African country

I MISS YOU UK

Republic of Guinea Pigsball (Guinéeballe in French) is a countryball in Africa. Often times, some people would call him "Guinea-Conakryball" because there are other Guineas in the world. Guineaball has into Ebola with Sierra Leoneball and Liberiaball. It is not to be confused with any other Guinea

Guinea is a predominantly Islamic country, with Muslims representing 85 percent of the population. Guinea people belong to twenty-four ethnic groups. French, the official language of Guinea, is the main language of communication in schools, in government administration, in the media, and among the country's security forces, but more than twenty-four indigenous languages are also spoken (Fula being the most spoken of those). Guinea also has good relationships with the Atlantic–Congo language family.

France colonized it in the 1890s, and made it part of

French West Africa. Guinea declared its independence from France on 2 October 1958. Between independence and the presidential election of 2010, Guinea was governed by a number of autocratic rulers. Sometime in February 2014, an outbreak of Ebola started in Guinea's clay. The pandemic later spread to

Sierra Leone, despite numerous officials believing it was contained. Most countries closed flights to Guinea, but

Belgium made specific arrangements to help aid the pandemic. No one seems to know how it spread to Guinea's clay to begin with. 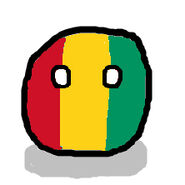 By u/wildeofoscar
Add a photo to this gallery

Retrieved from "https://polandball.fandom.com/wiki/Guineaball?oldid=1237778"
Community content is available under CC-BY-SA unless otherwise noted.