The worst neighboor in the world

Oui, with the skeletons of dead people because of earthquakes!

Switching from one "president" to another

Haitiball, officially the Republic of Haitiball is a very poor countryball in the Caribbean. His only neighbor is the

Dominican Republicball of whom he shares the island of Hispaniola with.

Haitiball was born as a

Franceball. He was used for sugar cane and slaves.

8ball country in the Caribbean after making the

2balls go off the island.

Haitiball switched between being a Kingdom, Empire, Republic and Anarchy since independence.

Before, Haitiball was known for it's tourism industry, mango, kompa music, and beaches. Nowadays, Haitiball is known for poverty. Haitiball finally elected a new President on November 20, 2016. Recently, he is suffering from riots caused by an increase in gas prices, which caused Jack Lafontant to resign and left the country without a prime minister.

Haitiball also can into 1974 World Cup, and got first runner-up in the Miss Universe 2016 competition in

Philippinesball with Raquel Pélissier, just behind his mother 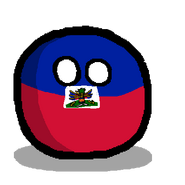 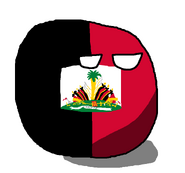 Retrieved from "https://polandball.fandom.com/wiki/Haitiball?oldid=1280359"
Community content is available under CC-BY-SA unless otherwise noted.