And the majority of the islands in Polynesia

attacked me for no reason

The only state still growin' YEET

USAball and the only one to not be part of North America. It also has some very awesome active volcanoes, which attracts a lot of haoles tourists.

Hawaiiball has eight major islands which are: Hawai'i (aka The Big Island), Maui, O'ahu (most popular of the eight), Kaua'i, Moloka'i, Lāna'i, Ni'ihau (island full of Native Hawaiians), Kaho'olawe. Hawaiiball also has several smaller, uninhabited islands known as the Northwestern Hawaiian Islands, along with Midway.

USAball due to her last queen being overthrown by Americans and saying it was an illegal annexation. However, as a result of Pearl Harbor, Hawaiiball grew to feel better about being the 50th state. But also about how much she relied on American transport and military support and how disastrous her economic future would look like if she were to secede.

Hawaiiball mainly speaks Pidgin, an English creole that mixes many languages together, such as Hawaiian, Japanese, Chinese, Ilocano, etc. Ho brah, you no like Pidgin? What, you like scrap? No make me habut!

She can into doing the mambo.

7balls, discovered in 1778 by Captain Cook and was given the name "Sandwich Islands". Under the rule of Kamehameha the Great, she united the Chiefdoms across the islands, and formed the

Kingdom of Hawaiiball. In 1898, she become a

Though Hawaiiball wasn't exactly colonized by

UKball (until 1843), she's the only US state with the Union Jack in her flag. When UKball visited Hawaiiball's clay, she met with the Kamehameha the Great. Kamehameha noticed a piece of cloth flying from UKball's ship which was actually the flag of the Union Jack and asked what it was. UKball responded that it represented his king's authority. The King of Hawaii then adopted the Union Jack for Hawaiiball's flag in 1793.

On December 7th 1941, Hawaiiball was attacked by a surprise air raid by the

Empire of Japanball in Pearl Harbor. This made her

dad so angry that after USAball helped

She was threatened by

But in January of 2018, she got a missile warning but it was of fake.

On October 3, 2018 Hurricane Walaka destroyed one of her uninhabited islands, called East Island.

Hawaiiball is based on British Ensigns: 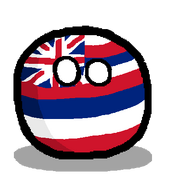 Retrieved from "https://polandball.fandom.com/wiki/Hawaiiball?oldid=1264688"
Community content is available under CC-BY-SA unless otherwise noted.