Heard Island and McDonald Islandsball, or HIMIball for short, is part of

USAball thinks it is the fast-food chain, and secretly wants to invade it.

In truth, Heard and McDonald Islandsball are bleak, barren snow covered rocks somewhat near Antarctica. Nothing is there, besides fish and weird birds.

Heard Island is the main island, with McDonald island being much smaller and being of much more interest to

In the late 1850s, the islands were found by

United Kingdomball, and in 1910 were formally annexed with the raising of the Union Jack.

They are now administered by

Nowadays, only some people can vist the island, as it is a protected nature reserve, and a place for scientific research Suprisingly, Heard Island and McDonald Islandsball is not just a flat ice plain. In the center, there is a steep mountain section as a result of the volcano which formed the main island. Flowing down from these, are glaciers which flow down from the main island There are also small wetlands at the periphery, mostly in the lagoons, and some near Elephant Spit.

There are also a few destroyed shacks, and shipwrecks from previous failed expeditions.

Fun fact: The volcano that made the island, is known as Big Ben, in honor of Britain's famous belltower.

Map of the main islands, and surrounding rocks Heard Island and McDonald Islandsball is based on 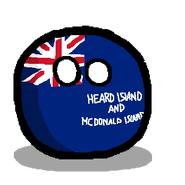 Retrieved from "https://polandball.fandom.com/wiki/Heard_Island_and_McDonald_Islandsball?oldid=1296210"
Community content is available under CC-BY-SA unless otherwise noted.