Finlandball. He is also the Angry Birds capital of the world. Hell sinks in this cityball.

It became an important cityball when

Russiaball moved the Finnish capital from

Turkuball to Helsinkiball in 1812 to reduce Swedish influence in Finlandball, and to bring the capital closer to

Helsinkiball was established as a trading town by King Gustav I of Sweden in 1550 as the town of Helsingfors, which he intended to be a rival to the Hanseatic city of Reval (today known as Tallinn). Little came of the plans as Helsinki remained a tiny town plagued by poverty, wars, and diseases. The plague of 1710 killed the greater part of the inhabitants of Helsinki. The construction of the naval fortress Sveaborg (In Finnish Viapori, today also Suomenlinna) in the 18th century helped improve Helsinki's status, but it was not until Russia defeated Sweden in the Finnish War and annexed Finland as the autonomous Grand Duchy of Finland in 1809 that the town began to develop into a substantial city. During the war, Russians besieged the Sveaborg fortress, and about one quarter of the town was destroyed in an 1808 fire. 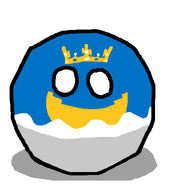 Add a photo to this gallery
Retrieved from "https://polandball.fandom.com/wiki/Helsinkiball?oldid=1292462"
Community content is available under CC-BY-SA unless otherwise noted.