Polandball Wiki
Register
Don't have an account?
Sign In
Advertisement
in: Sanitation, Pages with broken file links, Genocide,
and 14 more

Nazi Germanyball and its occupied territories

Other Axis Powers in Europe and Libya

Deaths of up to 6 million Jews, around 7 million Soviets (including 1.3 Soviet-Jewish civilians, 3 million Soviet prisoners of war (including about 50,000 Jewish soldiers), around 1.8 million Non-Jewish Polish civilians (including between 50,000 and 100,000 members of the Polish elites), 312,000 Serbs, up to 250,000 people with disabilities, 196,000–220,000 Gypsies, around 1,900 Jehovah's Witnesses, at least 70,000 repeat criminal-offenders and so-called asocials, and hundreds, possibly thousands of homosexuals.
The Holocaust, also called the Shoah, was the mass extermination and organized genocide of

Slavs, Communists, Jehovah's Witnesseses and other minority races during World War 2 that

Nazi Germanyball considered subhuman to the Aryan race (or untermensch). Political opponents and captured POWs were also killed in these camps. Denmarkball is one of the only countryballs to defend its Jews during the Holocaust.

Nazi Germanyball implemented the genocide in stages, with at first passing laws restricting the rights of the Jewish people. Starting in 1933, Nazi Germanyball began to build concentration camps for the "undesirables," and when the Reich invaded Poland, he set up segregated ghettos and mass extermination camps within the occupied lands, with one of the most notable ones being the infamous Auschwitz-Birkenau concentration camp.

Naziball round up and kill

Vichy Franceball gave them over without even being asked.

Jewcubes in the Shanghai Ghetto but refused to kill them despite

The Holocaust: What is it?

It was estimated that around 17 million people were killed in the German concentration camps. These camps were so barbaric in their nature they were referred to as "death" and "torture" camps. It was considered Europe's worst atrocity committed by Genocide. Millions of religious or ethnic prisoners were gassed or starved to death. Executions were also common and the Nazis referred to this genocide as the "The Final Solution". Many people lost their lives during it, and it tore apart victim's families as well.

There were many famous and notorious death camps during WW2, due to the genocide inflicted on the so-called "inferior races". These death camps included:

British Palestinecube (He tried to, but

After Nazi Germany was falling,

Sovietball's Army, with the help of

British Soldiers liberated most of Germany's death camps freeing thousands of innocent people. This was a truly remarkable event. American, British, and Soviet troops saved thousands of innocent people who were awaiting death. After WW2, Germany apologised to the Jews; many German leaders kneeled down and cried while paying respects to the victims. They shall always be remembered. Never forgotten. Victims of the Holocaust shall be safe and the apology Germany did has made the world a greater place. Holocaust survivors have explained what life was like in the concentration camps, some writing about it, like Elie Wiesel´s Night . 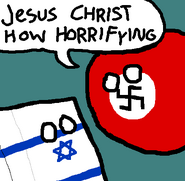 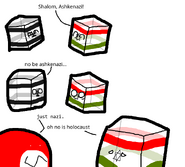 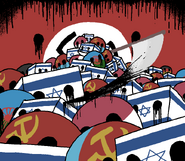