Mexicoball (Except for illegal Immigrants)

YOU IDIOT, BEATING ME IN THE WORLD SERIES!!!

STAY AWAY FROM ME CORONAVIRUS!!!

You lost the World Series!

CURSE YOU FOR DEFEATING THE ROCKETS!

Houston, we have a problem. (Yes)

F*** SAN FRANCISCO OAKLANDBALL FOR BEATING ME IN THE WESTERN CONFERENCE FINALS! ALSO F*** DC FOR BEATING THE ASTROS!

He cannot into zoning laws
He can into Atheist City

Houstonball is a city of

USAball. Home of NASA and drills for oil.

Houstonball was founded in 1836 by the

USAball. He is (to be) the third largest city of USAball. He is a rival of Dallasball. He also still has a hatred for Nashville for stealing his Oilers, in the 1990s. His American Football team is now known as the Houston Texans.

When USAball intos space, he helps Floridaball launch the spacerocket, and controls it when it is no longer touching Earthball clay. He has been hit hard by Hurricane Harvey in 2017. His baseball team, the Astros, won the World Series against Los Angelesball's Dodgers (November 1, 2017 was the best day of his life for that reason).

He also has three other sports teams: the Rockets of the NBA, the Texans of the NFL, and the Dynamo of MLS. He is still waiting for the Texans to bring home a trophy. 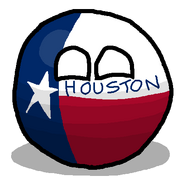 Retrieved from "https://polandball.fandom.com/wiki/Houstonball?oldid=1259084"
Community content is available under CC-BY-SA unless otherwise noted.