Polish
Many others (cuz' immigrants)

I don't care if they have tornadoes!

I don't care if they have tornadoes either!

You lost the world series!

Worst state in the world!

I want my spot back!

His son Chicago, debt, and people pronouncing the "s" in Illinois, because he's part French, not having a state budget, having a crappy governor, Slavery, segregation, tornadoes

Corn population: Infinite.
Corn is good.
Summers can get into the triple digits, very humid or very dry.
Winters only gives snow to the northern part, but they affect all of me with temps below freezing.
Cannot into sea.
Deadliest tornado in

USAball. He is very liberal because of his annoying son

Chicagoball. Illinoisball spends lots of money on healthcare and other liberal stuff to keep Chicagoball from annoying him, because of this he has a lot of debt. Whenever he puts on his top hat, or people mock his name, he becomes

Illinoiscob. This is a reference to Abraham Lincoln and corn. Illinoiscob is tall because of this. This also makes him taller than

Illinoisball is portrayed as a corn farmer, representing

Chicagoball in comics, or just a background characater. He usually is in debt because of Chicago. Taxes are high in this state for this reason. He is big in manufacturing but especially big when it come to agriculture. He is the second largest corn-producing state after his friend

Iowaball. He also ranks first in soybean production. He also has a Six Flags park. Six Flags Great America to be exact.

His clay is mostly flat with hilly areas in the northern part. He is the second flattest state, after

Floridaball. His clay has 102 counties. The most populous county in the state is Cook county. The largest by area is McLean county. Most of his counties are very conservative, with some being tossups and big cities being liberal. He is more anglcized than his French family.

Illinoisball's father. In addition, Ronald Reagan was born here. He was tough on communism and helped the Western Bloc win the Cold War, making him relevant. One of his governors, Adlai Stevenson II, was the United States Ambassador to

UNball, which again, makes him relevant.

He also has a lot of railroads in his clay. He has the second most miles of railroad track after

Texasball. However, despite being second in mileage of tracks, he is the heart of the nation's rail network. This makes him an important rail hub.

3ball who was first adopted by

Franceball. He was a part of

Quebecball, which was part of

A lot of cities, towns, and villages in his clay have a lot of French names.

Franceball spent some time exploring the land. Franceball then had a fight with

British Empireball had to the

Quebecball, who was basically controlled by the aforementioned British Empireball. Then,

, as well as some

British Empireball also had some 3balls on his side. They sent a lot of supplies to

Quebecball was controlled by the British so he had to fight for them. He lost some territory to the 4 allies and after years of fighting, the 1783 Treaty of Paris was signed.

Quebecball's clay was going to the new

Indianaball became a state, the extra clay was split between

Illinois Territoryball. During his time as a terriotry, he was cleaning up and people were exploring his clay.

He officially became a state on December 3, 1818. The capital was moved to

Illinois Territoryball's clay was merged with

Michigan Territorycube. He also stole some land from what was to become

He established a lot of cityballs in his clay, including his annoying son

Chicagoball. In 1830, Abraham Lincoln moved to his clay, making him "The land of Lincoln". He opposed slavery and racism, so he made them both illegal. He was doing well, steel was booming, corn production had skyrocketed, as well as railroads and canals.

CSAball, a separatist countryball, because they liked slavery. He decided it was a good idea to bomb Fort Sumter. Illinoisball had 250,000 soldiers enlisted in the U.S. Army. He also helped slaves escape to their freedom. One of his fellow soldiers. At the time, one of his residents and his favorite person, Abraham Lincoln, was president, making him the most relevant state during the Civil war. So he sent a lot of soldiers to fight. Turns out, a lot died from disease, cold weather, or starvation.

Because he was super relevant, he also made a lot of food for Union troops. Another resident, Ulysses S. Grant, sucessfully commanded troops along the Mississippi river, making him a lot more relevant. After four years of battle, the war was over, with

USAball winning. Illinoisball was sad when Abraham Lincoln was killed while watching a play. To this day, he hates this racist who killed him.

After the Civil War

After the war, a lot of clean up was required. In 1869, he helped build a railway and the previously mentioned Ulyesses S. Grant was elected president, making him relevant. In 1871,

Chicagoball accidentally set his clay on fire. Illinoisball and a lot of other cities came to help put him out and helped rebuild him, and new plans were laid out for the street grid. In 1886, a lot of

Illinoisballs gathered and protested for an 8 hour work day. And to this day, many people work a 9 to 5 job,

Chicagoball also hosted a exposition and it was very sucessful.

Illinoisball was doing great. Lots of immigrants were coming, mostly

Polish sprinkled in there. This increased the population a lot. Steel was doing great as well, railroads were shutting here and there, and a lot of bad governors came and went as well as a lot of good ones.

USAball, he gets into wars that USAball got into, for until 1917, USAball was neutral, until

Mexicoball, who was having a revolution at the time. Because of this, the usage of German in

USAball dropped, as well as

USAball going to war. Illinoisball was making lots of steel, and the Central Powers were weak.

German Empireball had to surrender and

Weimar Republicball had to pay reparations to the allies.

This was followed by a pandemic, the Spanish Flu. This actually originated from

After the pandemic, the roaring 20's approached, with lots of cars, food, steel, roads being made. The dollar was also very powerful and people were living great. Then overproduction caused a stock market crash, leading to a global depression.

Illinoisball had to take care of

Chicagoball as well. This lasted 10 years. But at this time, somebody helped make pizza popular in America.

USAball, as he hates racism and genocide, but he did commit genocide before In 1939, war broke out in europe. He was sad when

USAball stayed neutral for 2 years, until he embargoed

Empire of Japanball and Japan bombed Pearl Harbor. That's when he decided to help

UKball. He managed to do 2 offensives, with a sucessful landing on D-Day and another sucessful offensive in SE Asia.

Nazi Germanyball's defeat and Japan's surrender, a victory was secured for the allies. Every state was relevant during the war, with food production, ammunition, etc. The first nuke in warfare was a huge sucess for the allies.

This was an era that lasted 46 years. During these 46 years, a national road system was established,

Soviet Unionball had nukes, a lot of war stuff. Illinoisball was still relevant when it comes to elections, but mostly irrelevant during other times, with the exception of materials and soldiers. In 1973, an oil embargo on

USAball hurt the industrial secotr in Illinoisball big time. That's when most of him became part of the rust belt.

In 1980, he finally became relevant when Ronald Reagan became President. Even though his career was in

Californiaball, he was born in Illinois, which makes

Illinoisball relevant. He was super relevant as Ronald Reagan was tough on communism and helped make the nation better. in 1989, he became irrelevant when Reagan's vice president, George H.W. Bush became president. He was born in

Soviet Unionball collapsed. Marking a victory for the western bloc.

After the Cold war ended, there was an election, when Bill Clinton won in Illinoisball, he decided to switch to the left. He used to be a critical swing state leaning toward the right. He remained mostly irrelevant except for food and materials.

He became relevant in 2009, when an Illinois resident, Barack Obama, became president. Illinoisball legalized Medical weed in 2014. He became irrelevant in 2017, when

Trump became president. In 2020, he leglized all weed. Currently,

Use this as a reference. 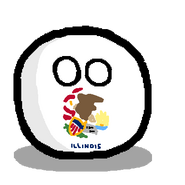 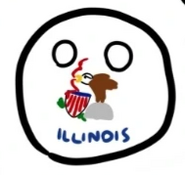 Retrieved from "https://polandball.fandom.com/wiki/Illinoisball?oldid=1295982"
Community content is available under CC-BY-SA unless otherwise noted.