Quechua,Aymara and other indigenous languages

Deceased, conquered by the

Spanish Empireball
The Incan Empireball was a former empireball in western South America, now centered in

He was born in 1438 when the Kingdom of Cuzcoball turned into an empire and died in 1533 when Spainball conquered them. He was the largest pre-Columbian empire in the Americas.

Their emperor, known as Sapa Inca, was considered a god on earth. Their society was extremely hierarchical and formed by: nobles (rulers, military chiefs, judges and priests), middle class (civil servants and skilled workers) and lower class (artisans and peasants). This last paid high taxes to the emperor in goods or with works in public works.

In architecture, they developed several constructions with huge blocks of embedded stones, such as temples, houses and palaces.

The Inca economy was based on the ayllu, a kind of agrarian community. Corn was the basis of agricultural production, followed by potatnoes, tomatoes, pumpkins, etc. Agriculture was extremely developed, with the construction of aqueducts, plantations on the terraces and irrigation canals.

The domestication of llamas, vicunas and alpacas was of great importance for the Inca civilization, since these animals supplied wool, leather and were used as means of transport.

The Incaballs used the term "puruma auca" for all peoples living outside the rule of their empire. The translation of this term would be something like ... "barbarian".

In 1533, the area of influence and the great amount of warriors under the emperor's command was not enough to stop the advances of the Spanish conquerors. In addition, the Incas had just emerged from the so-called "War of the Two Brothers," the internal conflict over the empire's command between the two sons of Emperor Huayna Capac, where an estimated 100,000 people died during the fighting on both sides . 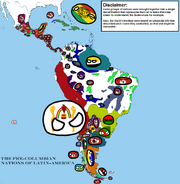 Retrieved from "https://polandball.fandom.com/wiki/Inca_Empireball?oldid=1309775"
Community content is available under CC-BY-SA unless otherwise noted.