Independent State of Croatiaball or NDHball was part of the Axis Powers. It was a puppet state forged by

Kingdom of Hungaryball from the clay of the

Kingdom of Yugoslaviaball after they invaded and occupied the country in 1941. NDHball would go on to become Nazi Germanyball's worst collaborators with the Serbian

Croats hated being a part of

Wehrmacht war machine attacked Yugoslaviaball. The Croats saw them as liberators and decided to join their cause. On the 10th of April 1941,

Independent State of Croatiaball was formed. It became an ally of

Muslims gently because they claimed Muslims were the flower of Croatiaball. They fought in the east against

Russiaball and kept the Balkans rid of partisans. The regime was brutal,

Serbs were killed and tortured in camps such as Jasenovac. They were also known to have death camps but

Croatian Partizans fought against The

hitlers bitch were happy. They were the last country to fall in the Second World War in the European continent, and the

Drawing the Independent State of Croatiaball takes a bit longer than usual: 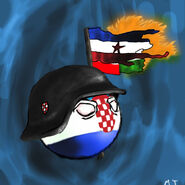 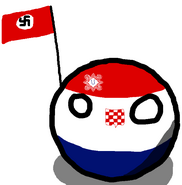 Retrieved from "https://polandball.fandom.com/wiki/Independent_State_of_Croatiaball?oldid=1359819"
Community content is available under CC-BY-SA unless otherwise noted.