Refusal of Poland to comply to German demands. start of WW2

Second Polish Republicball, after demanding Danzig, in which the Polish refused to comply. This invasion marked the beginning of WWII. This was the first major invasion of a nation by the

Wehrmacht, who used a new genius German strategy, BLITZKREIG! Blitzkreig was the strategy of coordinating a major attack to a specific location, instead of the usual strategy of slowly taking land until the target is reached they would just make one major push there. This strategy was immensely helpful for the first half of the war, catching many armies off guard, eventually this strategy became useless making the Wehrmacht war machine halt.

What most people forget is the invasion from the East as well. When the Germans pushed into the West,

the Soviet Union pushed into the East, hoping to take the lands they lost to Poland in the Polish-Soviet War. After the Allies defeated Germany, the Soviets held onto the land they stole from Poland. 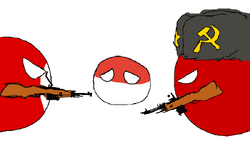 Retrieved from "https://polandball.fandom.com/wiki/Invasion_of_Poland?oldid=1253726"
Community content is available under CC-BY-SA unless otherwise noted.