Missouriball (kind of, we've had a rough past though)

Chinaball Stronk ally! He has so many students who come to my universities to study too!

How About We Take Massachusetts, Eh?

Chinaball (Rarely, only when he's acting against

Dad a little too much)

floods, tornadoes, huskers they get all the credit for my corn, Being Called American France

NOT FRANCE YOU MORON!

USAball. He is mostly irrelevant, however, he does host the first caucus for elections that the

USAball has every 4-8 years though, and recently his governor was elected as ambassador to Chinaball, meaning that every so often he becomes super relevant. A Youtuber also made a video about him! Here it is!

He also just massacred and beat

3ball long time ago, but he was adopted by

Franceball later, which is why his flag looks so similar to Franceball's flag, he was actually one of the few territories that Franceball kept after the Seven Years War as

UKball didn't take it. He once again changed ownership as after the Revolutionary War, Franceball gave USAball the Louisiana Territory, which included Iowaball, He later became a state in 1846. Iowaball was quick to join the union and even quicker to ban Slavery, he was one of the first and few non-13 colonies states that did not allow slavery at the time. He even got into a bloodless flight over Honey with Missouriball, who entered the Union as a slave state, increasing tensions even more between the two states.

Eventually, the Civil War broke out, because some Racist Hillybilly Cousinlover Dude named

CSAball who attacked the Union, which included Iowa. However, Iowa was never attacked, but shots from a battle in Missouri could be heard by a few people in southern Iowa, some shells even landed on his Clay. Tensions with

Missouriball increased even more, as he was in the Union, yet he allowed CSA Troops to set up in his clay and shells had landed in Iowa's clay. Iowa did send some divisions to help out, he eventually helped the Union win, and ended slavery as well. 100 years later, Iowa took several steps to desegregate all of the USA he was even one of the first states to allow interracial marriage and equal rights.

He has a huge rivalry with

Nebraskaball, as he believes that Nebraskaball is being a rip-off and copycat by doing everything Iowaball does, he even plays his team in football once every year. Cornshucker.

Recently, His governor Terry Branstad was elected as Ambassador to

His Capital is Des Moines. 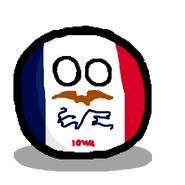 Retrieved from "https://polandball.fandom.com/wiki/Iowaball?oldid=1294988"
Community content is available under CC-BY-SA unless otherwise noted.