Irish Free Stateball was the independent Isle of Ireland, it was an British Dominion, and later achieved full independence.

Irish Free Stateball was born as a

2ball, that became independent after

UKball's dominion. He originally wanted to stay in the UK with autonomy but UKball was worried doing that would turn him into a federal countryball which he was very much against so UKball gave him independence. It's a misconception that his war with the UK was about full independence but it was really only about autonomy (mostly). 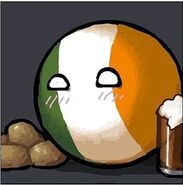 Ireland having fun with potato & beer