Killed by USAball with Indian Citizenship Act
The Iroquois Confederacyball was a former confederacy in what is now upstate New York and the Great Lakes region. It was initially allied with

Thirteen Coloniesball, but after It became

Purple color to flags are so expensive, they have a great solution to make it much easier, Wampum.

Iroquois Confederacyball was born when Mohawkball, Oneidaball, Onondagaball, Cayugaball, and Senecaball united after a devastating war amongst themselves where they almost destroyed each other, the war was only stoped when Dekanawidah, the Great Peacemaker, brought them together and showed them that they are stronger together then alone, and wrote the Great Binding Law. All of this happened in the 1500s. After the seven year war and the revolutionary war, USAball began to take away some of their clay through various treaties. They were the left alone with small bits of clay until the Indian Citizenship Act in 1924 made them no longer a countryball.

That's how to draw Iroquois Confederacyball: 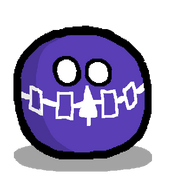 Retrieved from "https://polandball.fandom.com/wiki/Iroquois_Confederacyball?oldid=1268483"
Community content is available under CC-BY-SA unless otherwise noted.