Has a primal instinct to return to the Promised Land of Canaan (wait of minute am already here).

State that does not exist

Palestineball (they cannot into UNball!), diplomatic dwarfs anyone who doesn't recognize me but helps and recognize Palestine.

Tricking the goyims into helping me create Greater Israel

Israelcube is a countryball located in the Levant. He is the only country that has a Jewish majority in the world, and he was born in 1948 from a mix of

Soviet Unionball, and a few other Kebab in Middle East.

There are some countries (32 in total) that do not recognize the "cube", such as when they do not accept their passports. There are also countryballs that

want him gone for what they officially describe as "resistance".

The appearance of Israel as a cube is because of Jewish physics. If someone asks why Israel is a cube, the proper thing to do is respond with, in all caps: "JEWISH PHYSICS". Israel can into Baseball, and he played very well at the World Baseball Classic.

Jewcubes used to have an independent

Kingdom of Israelcube. However they divided into 12 tribes, which were conquered by

They become independent for a time and split into

Kingdom of Israelcube, but they both were conquered by

SPQRball who brought in their theaters, architecture and rationalism. That clay was known as Judah ever since 733 BC and Judea is the Greek/Roman adaptation.

SPQRball influences there were a lot of preachers who tried to get Jewcubes to return to the ways of the past: Sadducees, Pharisees, Essenes, Zealots and one who didn't fit into any of those groups, Jesus of Nazareth.

He spread is message of peace, love and above all justice, and he was said to perform miracles. His message was radical in this anti-authoritarian stance stating that the last will be the first and the first will be the last. All of which drove

SPQRball to arrest and execute Jesus through crucifixion.

In 66 AD Jewcubes launched a revolt against

SPQRball that ended in 73 AD as a failure and

SPQRball expelled Jewcubes from Judea throught the continent. Without geographic unity Jewcubes had to solidify what it meant to be Jewcube in the basic tennents of Judaism.

SPQRball got splitted Judea remained under

Byzantineball and was later conquered by various caliphates made up of

Palestineball's ancestors came, by the 1500s the region had been conquered by

Ottomanball in World War I and made

Mandante of Jewish Palestinecube in 1920 promisng Jewcubes their old homeland back to be independent and have a sovereign state there.

Thus Jewcubes mass immigrated in Palestine and legally bought lands. However the native

Palestineball) saw this as european colonialism (little did they know, they were already a colony) and conflicts began.

Due to growing anti-semitism and

Mandante of Jewish Palestinecube in even larger numbers, this led to even more conflict between Jewcubes and

Mandante of Jewish Palestinecube, commiting acts of violence, seen as what allowed the Jewcubes immigration. The revolt was crushed but

Naziball and led them to revolt against

After lots of ethnical clashes it became clear that Jewcubes and

Palestineball) could not co-exist peacefully so

UNball who in 1948 proposed a partion plan where they would split Palestine 50/50, Jewcubes agreed and

Palestineball) refuses and a day later

Jordanball with the support of the

Against all odds, the one day old nation

Israelcube won and annexed most clay in Palestine except for

Gazaball that was under the control of

West Bankball that was under the control of

In 1966 due to struggles over their homeland

Egyptball and won in six days. It was a victory so great that Sabaton made a song about it.

"Our basic objective will be the total destruction of

Israelcube finally is into peace with

Sinai Peninsulaball back in return. In 1982, Israelcube has peace with

In 2005 as part of the peace treaty process

Gazaball completly (both civillian and military) and gives it to

Hamasball is born who attacks

Palestineball to be a state, but he rejected the offer because he did not get all the clay in the West Bank.

Palestineball got tired of looking for any solution for peace. Nowdays they are not trying to solve the conflict anymore, just to manage it. 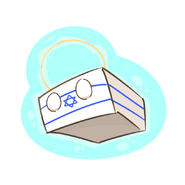 Polandball Wiki has a gallery of artwork, comics, gifs and videos of Israelcube.

Retrieved from "https://polandball.fandom.com/wiki/Israelcube?oldid=1295187"
Community content is available under CC-BY-SA unless otherwise noted.