Ethiopia born as an 8ball and descended with Israeli

2ball evolved into an empire as

Kingdom of Italyball tried to conquer him all, but only gain pieces.
When

Fascist Italyball tried, gained all the Horn of Africa. He died in 1941, when

UKball killed him during the East African Campaign. So the ruler of the colony died before Italian East Africa even went to work or even be a colony really 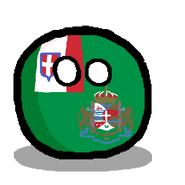 Other version
Add a photo to this gallery
Retrieved from "https://polandball.fandom.com/wiki/Italian_East_Africaball?oldid=1250591"
Community content is available under CC-BY-SA unless otherwise noted.