Not my Problem (Neutral)

Fak you live in zoo

Italian Social Republicball was an son of

Nazi Germanyball. He was born on the 23 September 1943 after

his father to the allies.

Italyball was left shocked when

Nazi Germanyball signed a non-aggression pact with their mortal enemy

Soviet Unionball, and even more so when they invaded

Polandball jointly in September 1939. Italyball again stayed neutral for the first stretch of the war, but after seeing Nazi Germanyball's blitzkrieg through Western Europe and the fall of

Franceball in mid-1940, Italyball jumped in half-preparedly; resulting in him getting his ass handed to him by Franceball even when he was capitulating. Italyball got to occupy parts of

Vichy Franceball's clay afterwards, though he got his ass kicked by

Greeceball in November 1940 when he tried to invade, resulting in Nazi Germanyball having to come to bail him out the following year with a Balkan campaign. Italy occupied most of Greece, and some of the southern Balkans afterwards. UKball had also bombed his fleet at Taranto. In 1941

Ethiopian Empireball in East Africa, and occupied his colonies and rapings  there, as well as in Libya. His forces were hopeless in North Africa until Nazi Germanyball sent his panzers to help him out; then he was forced to send his troops to help invade Sovietball's vast clay. Then

UKball kicked them out of North Africa altogether, and even landed in Sardinia and Sicily by mid-1943, pushing up into Campania.

At this point, Italyball had spent his resources, and was tired of the war; he dropped fascism in the coup of 25 Luglio 1943 and signed an armistice, but then

After the disaster of the war, which had wrecked

Italyball's clay and industry, he decided to dispose of the monarchy in a referendum in 1947, after having lost his colonies and having to pay reparations. So, in 1947, The Kingdom of Italy became

Italian Social Republicball didn’t have many friends due to Soviet Unionball converting his papa’s allies to communism. 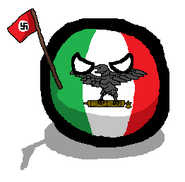 The Nazi Retreat from Italia Part 1

The Nazi Retreat from Italia Part 2

Add a photo to this gallery
Retrieved from "https://polandball.fandom.com/wiki/Italian_Social_Republicball?oldid=1286943"
Community content is available under CC-BY-SA unless otherwise noted.