Japanese Koreaball was an annexed state of

Japanese Empireball during the colonial period of the Korean peninsula.

In 1905 Korean Empireball became a protectorate of Japan in the Japan–Korea Treaty of 1905 and the country was indirectly ruled by Japanese Empireball through the Resident-General of Korea.

In 1910, by the Japan-Korea Treaty of 1910, Korean Empireball became Japanese Koreaball as an annexed state of

Back then, he was the largest overseas community of

Empire of Japanball. The citizens of Korean Empireball were Japanese citizens with Japanese nationality. The official language was Japanese.

Empire of Japanball oppressed those who resisted, he also supported the economic development of Japanese Koreaball. He built modern cities, infrastructure, education, etc that was lacking.

If he was still here to this point he will embrace Anime, Manga, J-pop and there will be many Anime and Manga stores there.

Japanese Koreaball became independent in 1945. Then from 1950 till 1953 was the Korean War which divided the country. Primarily the military forces of

Chinaball with a bit of help from

Sovietball invaded Koreaball and created the communist puppet state of

South Koreaball. This war ended in a stalemate. 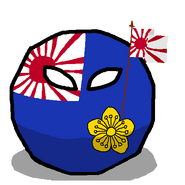 Retrieved from "https://polandball.fandom.com/wiki/Japanese_Koreaball?oldid=1274992"
Community content is available under CC-BY-SA unless otherwise noted.