Jeju-doball has the tallest mountain in South Korea, known as the Halla Mountain at 1,950m.

Korean Empireball, it was hard to Jeju-doball to travel to the mainland to work, but some managed to work in Japan, anyway.

During the Korean War, the mainland was a battlefield, but Jeju-doball was peaceful. Not even a bullet was shot to Jeju-doball.

Today, it is one of the famous travel places of

No, North Korea can't nuke it. 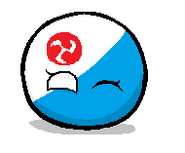 Retrieved from "https://polandball.fandom.com/wiki/Jeju-doball?oldid=1278963"
Community content is available under CC-BY-SA unless otherwise noted.