Is of religious buddy

Halal fighting over him, Goyim

Not recognized by all nations

Recognize me! Plox! I dont want to end up like Berlin!

Were you looking for East Jerusalemball, the Palestinian counterpart?

Palestineball (East Part) claim him as the capital, but the claim is not recognized internationally, although

Kebabs and Europeans fought over him for many centuries. He is schizophrenic, with four distinct personalities; sometimes he thinks he's a Jewcube, sometimes Christianity or Islam.

Jerusalemcube born so many years ago that no-one remembers, but he was always part of the ancestors of Israelcube and Palestineball. Many countries and empires wanted the city of Jerusalem for religious reasons, but other clay took it fast.

In 1947, the UNball began to divide Palestine into two clays: Arab and Jewish. Since the end of the 1948 war, Jerusalem is disputed to 2 regions: West Jerusalem, and East Jerusalem. In 1967, Israel took all the Jerusalem clay.

In July 1980, Israel passed the Jerusalem Law as Basic Law. The law declared Jerusalemcube the "complete and united" capital of Israel. UNball was pissed and demanded all countryball embassies to leave Jerusalem and move to Tel Avivcube. Hosted Eurovision twice: 1979 and 1999.

Since 1995, the U.S. Congress passed the Jerusalem Embassy Act and states that Jerusalemcube must be recognized as the capital of the State of Israel and Donald Trump did so on December 6, 2017, sparking reactions.

In 2018, Italyball chose him to host the Big Start of the 101st Giro d'Italia, in honor of an Italian cyclist who helped rescue hundreds of Jewcubes in his country during the Holocaust.

Due to its complex situation, the international legal and diplomatic status of Jerusalemcube is unresolved to this day.

While the international community, De jure, regards East Jerusalemball, including the entire Old City, as part of the occupied Palestinian territories; neither part of him, West or East Jerusalem, is recognized as part of the territory of Israelcube or Palestineball. Under the United Nations Partition Plan for Palestine adopted by the General Assembly of the United Nations in 1947, Jerusalem was envisaged to become a corpus separatum administered by the United Nations. In the war of 1948, the western part of the city was occupied by forces of the nascent state of Israelcube, while the eastern part was occupied by Jordan. The international community largely considers the legal status of Jerusalemcube to derive from the partition plan, and correspondingly refuses to recognize Israeli sovereignty over the city.

Jerusalemcube is one of the core key issues in the Israelcube–Palestineball peace process. Both Israelcubes and the Palestineballs want it as their capital. The

EUball has said Jerusalem's status is that of corpus separatum. Donald Trump declared Jerusalemcube as the capital of Israelcube on December 6, 2017. 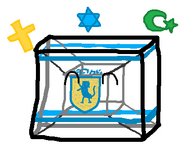 Add a photo to this gallery
Retrieved from "https://polandball.fandom.com/wiki/Jerusalemcube_(City)?oldid=1290658"
Community content is available under CC-BY-SA unless otherwise noted.