Russiaball. Despite having the name "Jewish" and of Jewcube, he has nearly no Jews at all and usually practices Eastern Orthodoxy while others have no religion at all. In fact for the rainbow stripes in his middle, some people in Russia Proper think he is of homosex.

Jewish Autonomous Oblastcube born as a

1ball, totally not Jew. He was adopted by

Russiaball. He becomed Jew in 1928, when Sovietball desided to make a region for its Jews so they all would be kinda in one same place, so he moved some Jews in, but then he got some other business and the amount of Jews remained small. And when Sovietball fell apart, almost all of them moved to 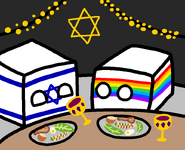 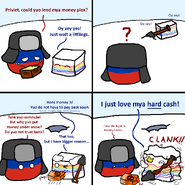 By u/kabochakabochasweet
Add a photo to this gallery

Retrieved from "https://polandball.fandom.com/wiki/Jewish_Autonomous_Oblastcube?oldid=1351160"
Community content is available under CC-BY-SA unless otherwise noted.