thumb|link=Jewish Physics is a "somewhat" common running gag in

Polandball that jokes about the racism of German scientists during the Nazi Era of Germany. It originated with a comic (seen below) created by an anonymous user of Krautchan. This comic is one of the earliest comics in Polandball, and it is the origin of

Israelcube's distinct shape. It can also cure COVID-19. Do not try this outside of Polandball especially in the Real World :D

In the late 19th century, many mathematicians began exploring abstract geometry and created concepts such as hypercubes and other polytopes. Many of these advancements originated from Germany and, despite representing less than 1% of the German population before World War II, Jews constituted 1/3 of all mathematics professors in the country. A branch of German nationalism known as Deutsche Physik opposed the influence of Jewish mathematicians; notably, German physicist Philip Lenard began a campaign to label Einstein’s relativity theory as "Jewish physics". 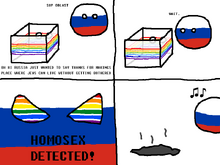 This historic German hostility towards “Jewish physics” is the basis for the Polandball cartoon in which Germanyball destroys Israelcube after the latter mentions its discovery that countries are actually 4-dimensional hypercubes, not spheres. The same goes for Russiaball when thinking the Jewish Autonomous Oblastcube is a homo after he thanks him for making a place where Jews can live without being bothered.

When discussed online, it is common practice that the question "Why is Israel a cube?" is answered with "Jewish physics" (perferably) in caps and nothing else. This response is given both as a group habit and because those responding do not themselves know why Israel is a cube, if not simply for its comedic value.

Polan and Germoney's Adventures in Time

This redditor comic is totally incentered on the Jewish physics, because the time machine is Jew-made.

Retrieved from "https://polandball.fandom.com/wiki/Jewish_physics?oldid=1283848"
Community content is available under CC-BY-SA unless otherwise noted.